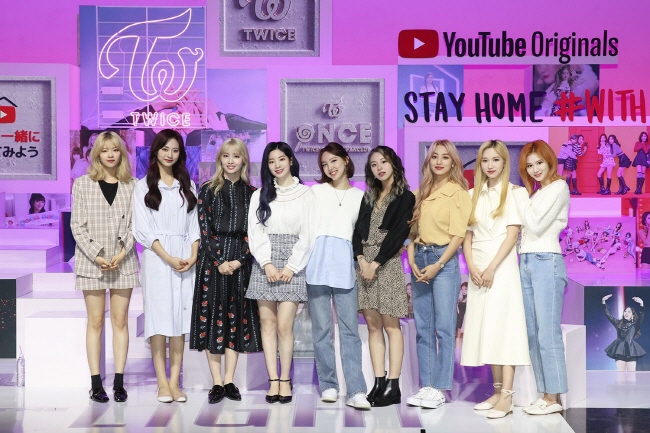 An image of TWICE during an online streaming event on April 28, 2020, provided by JYP Entertainment

SEOUL, April 28 (Korea Bizwire) — An upcoming YouTube original series documenting K-pop girl group TWICE’s struggles before its debut up till its record-setting global ascent could give a message of hope, the band said Tuesday.

It will be available in 81 countries and territories.

The series is a tribute to the nine-member multinational band’s struggles and success, with the anonymous teenage trainees growing into global K-pop icons.

TWICE took the least time for a non-Japanese act to stage its first solo concert at the highest-profile Japanese concert venue of Tokyo Dome.

The docuseries spotlights the band’s first globe-trotting tour, “TWICELIGHTS,” which was launched in May last year and encompassed three American cities, including turbulent behind-the-scenes stories from the concert journey.

“So far, we have shown only cheerful sides of us. But we wanted to come up with more honest stories as well through the upcoming documentary,” TWICE member Dahyun said in a media and fan event streamed online Tuesday.

“It will tell the story of our growth as well as our struggles and the process to overcome and laugh off the struggles together with other team members,” she said.

“Eventually, we wanted to talk about having hope. I hope we can send out a message of hope through our story of never giving up and going all the way,” according to her.

Member Nayeon recalled her pre-debut life as a teenage trainee as the darkest time of her show business career.

“Back then, the future looked very uncertain, and I was weighed down, thinking if I would ever be able to make a debut. After debut, I also suffered when my body aches and is unable to keep up with my mind as seen in the documentary,” she said. Including the successes and difficulties the female band has experienced in its five-year career, the documentary carries “the start, the present and the future of TWICE,” according to member Jeongyeon.

“Through the documentary, I felt once again that we could overcome difficulties and make it happen because we are together,” Japanese member Sana said.

Another Japanese member, Momo, said the documentary will remain as a major landmark to the band members.

Member Chaeyoung noted the band’s pleasure at having contributed to the global ascent of K-pop, saying, “I hope TWICE will be one of the many pillars when K-pop posts further development.”

Each of the remaining seven episodes will be released every Wednesday over the following seven weeks.

For YouTube premium members, the whole package of eight episodes will be immediately available at once Wednesday.