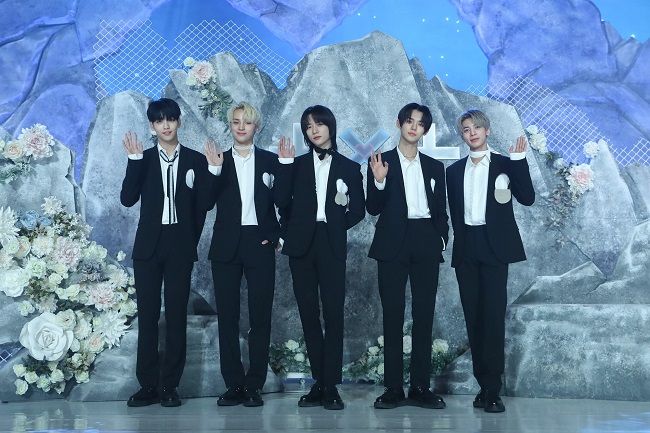 This photo, provided by Big Hit Music, shows K-pop act Tomorrow X Together (TXT) posing during a livestream news conference on May 31, 2021.

Album sales accounted for a majority of the total with 39,000, while the remaining units came from digital downloads and streams, according to Billboard.

The new ranking marks the highest-charting record for the five-piece band. The group’s previous best was No. 25 with its third EP “Minisode 1: Blue Hour.”

The group first entered the main albums chart with its March 2019 debut EP “The Dream Chapter: Star” landing at No. 140 on the Billboard 200.

There are so far six K-pop acts that have made it into the top five spots of the main albums chart: BTS, BLACKPINK, Super M, NCT 127 and Monsta X.

TXT released “The Chaos Chapter: Freeze” on May 31. The eight-track album includes main track “0X1=Lovesong (I Know I Love You),” which RM of BTS helped pen, as well as the group’s first original English track “Magic.”