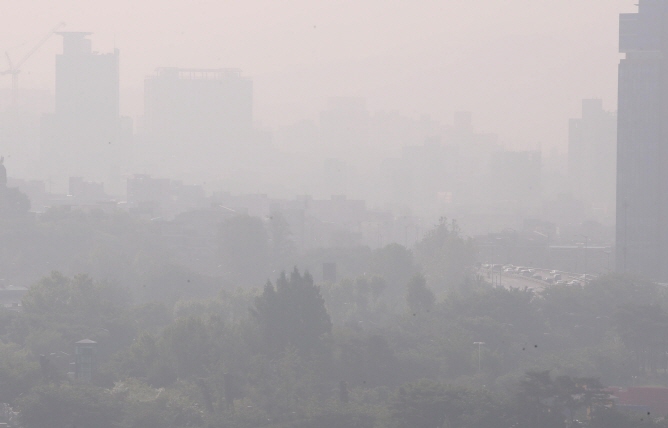 This photo taken May 16, 2019, shows a view of Guro Ward in Seoul on a day when fine dust levels were high. (Yonhap)

SEOUL, Dec. 6 (Korea Bizwire) — A recent study has found that fetuses exposed to ultrafine dust (PM2.5) air pollutants, are more likely to have disabilities after birth.

PM2.5 — particles in the air smaller than 2.5 microns in diameter — are Group 1 carcinogens that penetrate into peripheral blood and affect all organs in the human body.

A team of researchers from Chonbuk National University studied the symptoms after exposing pregnant mice to ultrafine dust for the past two years.

The results showed that as the offspring of pregnant mice who were exposed to ultrafine dust grew older, they were 36 percent more likely to have a myeloproliferative disorder.

It was also found that ultrafine dust, which penetrated through peripheral blood in the offspring’s mice, caused the aging of the microenvironment first and gradually induced the aging of haematopoietic stem cells in the bone marrow.

The study has been highly praised by the academic community for presenting the effects of ultrafine dust on fetal births as animal models.

“The study was based on the annual ultrafine dust concentration (50μg) in Beijing, China,” said professor Kook Sung-ho from the research team.

“Our country is relatively low in concentration, but we have confirmed the possibility that ultrafine dust can affect the birth of the fetus sufficiently.”