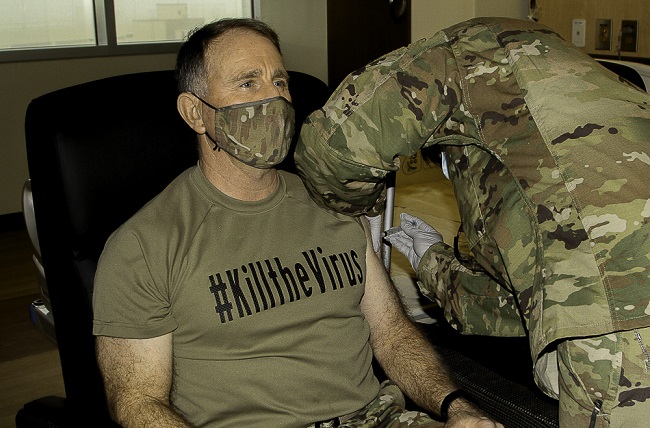 This photo provided by the U.S. Forces Korea (USFK) shows commander Gen. Robert Abrams receiving a COVID-19 vaccine at Brian D. Allgood Army Community Hospital at Camp Humphreys in Pyeongtaek, Gyeonggi Province, on Dec. 29, 2020. The hospital is one of three U.S. Department of Defense medical treatment facilities in South Korea inoculating the medical staff and key personnel during the initial worldwide distribution of the vaccine.

The first shipment of the Moderna COVID-19 vaccine arrived in South Korea on Friday and had been in cold storage at Camp Carroll in the southeastern county of Chilgok before being distributed to USFK’s three military treatment facilities Monday, according to the U.S. military.

The three locations administering the Moderna COVID-19 vaccine are the Brian D. Allgood Army Community Hospital at the U.S. Army Garrison in Camp Humphreys in Pyeongtaek, some 70 kilometers south of Seoul; the 51st Medical Group at Osan Air Base in the same city; and the 8th Medical Group at Kunsan Air Base, located in the western city of Gunsan.

The U.S. Department of Defense earlier chose the USFK headquarters as one of four sites outside the continental United States to receive the initial vaccinations.

The exact number of doses is not immediately known.

Following this initial phase of inoculations, additional vaccine shipments will arrive in South Korea to become available for those eligible and who choose to receive it, USFK said. It did not announce any related timetable.

The Moderna vaccine was authorized for emergency use earlier this month and taking a vaccine is not mandatory but voluntary.

But Abrams said, “I strongly encourage all eligible individuals to receive the vaccine.”

“The COVID-19 vaccine is another tool that will help USFK maintain a robust combined defensive posture and our ‘Fight Tonight’ readiness approach,” he said.