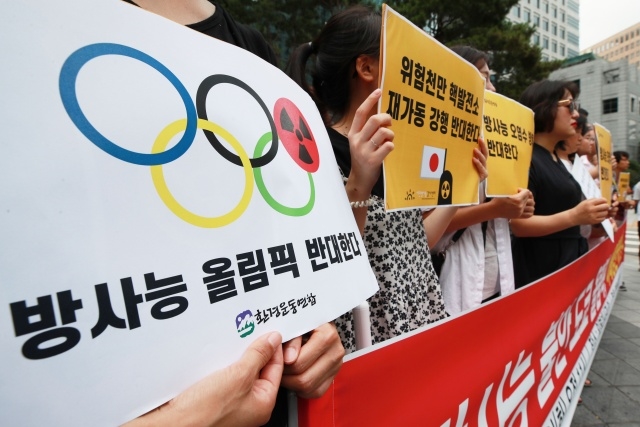 Members of a civic group hold a news conference in front of the former Japanese Embassy in Seoul on Aug. 13 to call on the government to boycott the 2020 Tokyo Olympics due to concerns about radiation. (Yonhap)

SEOUL, Oct. 30 (Korea Bizwire) — The Voluntary Agency Network of Korea (VANK), a cyber diplomacy organization, has begun a campaign to inform the world about nuclear safety issues in Japan.

Users can sign the petition by becoming a member of the website, allowing each petition to forecast world public opinion based on the number of people who have signed, while putting pressure on those whom the petitions target.

In the petition, VANK based their argument on Article 2 section 10 and section 14 of the Olympic Charter, which emphasizes the need to protect the health of athletes and visitors, and take an interest in environmental issues.

VANK referred to a Greenpeace survey conducted on March in Fukushima arguing that “Fukushima’s radiation level is still eight times higher than the international safety limit.”

“The Tokyo Organizing Committee of the Olympic and Paralympic Games decided to allow the Japanese ‘hakenkreuz’ flag into stadiums, and rejected any further discussion on food products from Fukushima,” VANK head Park Ki-tae said.

“We have posted the petition to raise public awareness about the issue worldwide.”