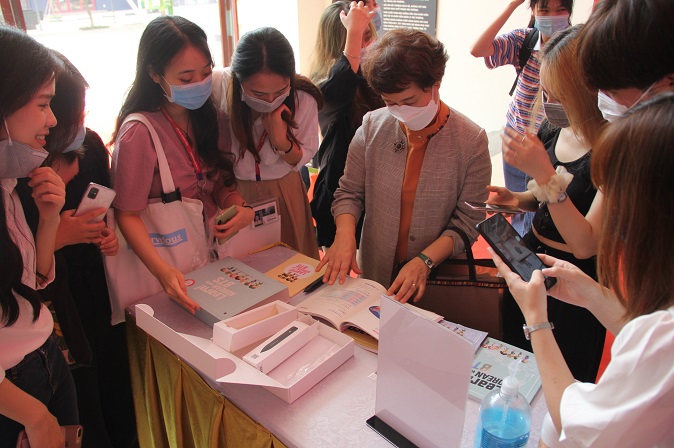 Vietnamese students and faculty at Thang Long University in Hanoi check out Korean language study material provided by global K-pop sensation BTS, on Aug. 27, 2020, in this photo provided by Korean News in Hanoi.

HANOI/SEOUL, March 4 (Korea Bizwire) — Vietnam has designated Korean as one of its first foreign languages, allowing it to be taught from primary school onward beginning this August, South Korean officials said Thursday.

Education of the Korean language has expanded in the Southeast Asian country, driven by the popularity of Korean pop culture and deepening economic ties between the two nations.

The Vietnamese education and training ministry last month added Korean and German to the list of major foreign languages that can be offered as an elective course to third-year primary schoolers and those in higher grades, according to the Korean embassy in Hanoi.

The Korean and German languages can be taught in elementary schools starting in August when a new semester begins, officials said.

In 2019, Vietnam selected Korean as a second foreign language, which can be learned in middle and high schools, after a pilot project since 2017. Around 1,500 students now learn the Korean language.

South Korea plans to support the program by developing textbooks and teaching manuals and sending instructors, according to the embassy.