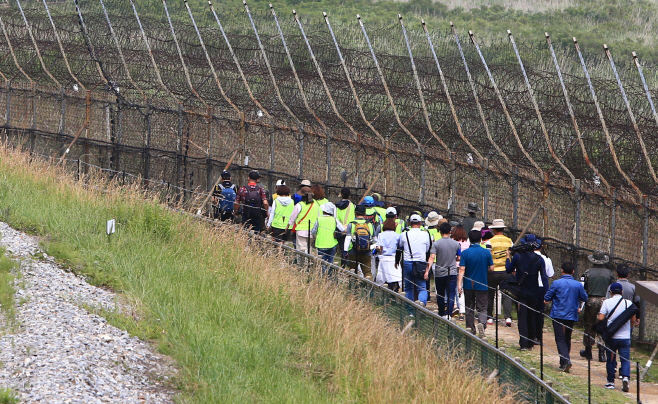 SEOUL, Jul. 17 (Korea Bizwire) — The Goseong municipal government on South Korea’s eastern coast said Wednesday it will suspend one of the two tour programs for a trail along the Demilitarized Zone (DMZ) separating the two Koreas for 15 days next month in the eastern coastal town.

The walking tour program of the first DMZ Peace Trail will be closed from Aug. 1-15 for safety reasons arising from a heat wave concern and traffic congestion.

The operator will run the other tour program in which visitors travel by bus.

The municipality also said group bus tours along the trail will begin Tuesday, with up to 40 people, including individual participants. Only individual tourists have been allowed to travel on the trail since it was launched in April.

Anyone who wishes to organize a group tour is asked to access the agency’s website — www.dmzwalk.com — and select the group tour option and a date to travel on the trail.

Applicants also need to certify his or her identification using a cellphone and register a list of between five and 40 participants on the website.

The DMZ hiking trail’s launch was followed by the opening in June of the second one in the central border town of Cheorwon, Gangwon Province.

The third and last trail along the DMZ is expected to open in the border town of Paju in September.

The DMZ trail project is part of the South Korean government’s efforts to have visitors experience inter-Korean peace and the security situation on the peninsula.