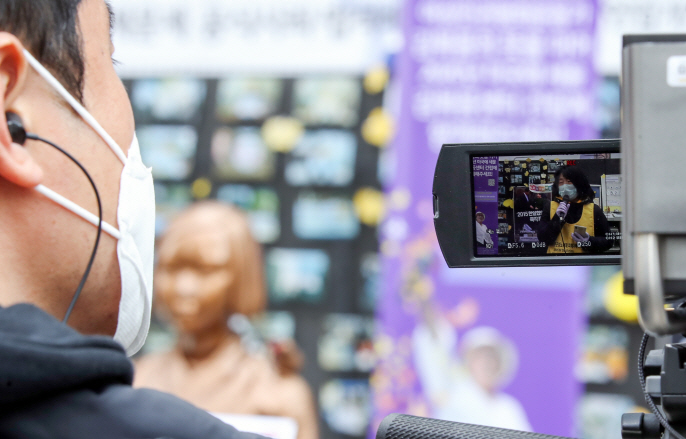 A decadeslong weekly rally in front of the Japanese Embassy in Seoul is aired live via YouTube on Feb. 26, 2020, to call for Japan’s apology and compensation for the victims of the Japanese army’s sexual slavery during World War II, euphemistically called comfort women. (Yonhap)

SEOUL, Feb. 27 (Korea Bizwire) — With the spread of the coronavirus outbreak raising alarm across the country, regular Wednesday demonstrations demanding that Japan apologize for its wartime sexual slavery, protests that have been held continuously since 1992 have also been affected.

On Wednesday, for the first time ever, the Korean Council for Justice and Remembrance for the Issues of Military Sexual Slavery by Japan (KCJR) held a weekly Wednesday rally calling for Japan’s apology over wartime sex slavery online.

Only six activists from the KCJR gathered in front of the former compound of the Japanese Embassy in Jongno District, Seoul, to make progress reports and remarks, and broadcasted them live on YouTube to allow citizens to join the protests online.

Participants have come together for the rally every week over the past 28 years, except when they canceled the gathering following the 1995 Kobe earthquake and when they instead held a remembrance ceremony in the aftermath of the massive earthquake and ensuing tsunami in March 2011.

“We send our support and encouragement to the countless people who are doing their best to respond to the COVID-19 crisis and wish for their safety,” said Yoon Mi-hyang, president of the KCJR.

She added that “we cannot stop our voices, so we are going to take this opportunity to carry out our Wednesday rally online.”

This is the first time that a rally has been held online.

“The Japanese government must make an official apology to victims of the Japanese military’s sexual slavery system and must offer compensation,” protestors both online and offline chanted together.

“We are likely to hold a Wednesday rally online next week as well,” said an official from the KCJR.