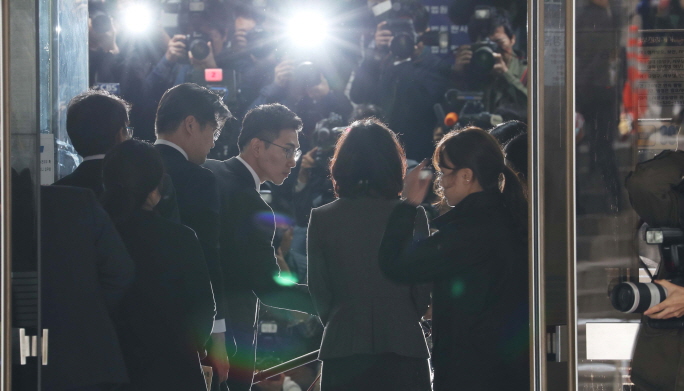 Chung Kyung-sim (C), the wife of former Justice Minister Cho Kuk, appears at the Seoul Central District Court in southern Seoul on Oct. 23, 2019, for a hearing that will decide whether an arrest warrant for her will be issued. (Yonhap)

SEOUL, Oct. 24 (Korea Bizwire) — The wife of former Justice Minister Cho Kuk was arrested Thursday in a court decision that is expected to add traction to the prosecution’s probe into charges over her daughter’s college admission and a financial investment.

Following a hearing on Wednesday, a Seoul court approved an arrest warrant for Chung Kyung-sim, a professor, saying that the charges are justified and there is the possibility of her attempting to destroy evidence, among other reasons.

For about two months, the prosecution has been looking into Cho’s family over allegations regarding the forgery of a college presidential citation, a dubious investment in a private equity fund (PEF) and academic favors.

The court’s decision is expected to accelerate the prosecution’s probe into Cho’s family, which has continued despite criticism that the extent of investigation is excessive.

There is a high possibility that the prosecution will call in Cho for a probe into suspicions that the former justice minister may be aware of charges applied to Chung or might have been involved.

The prosecution sought an arrest warrant on Monday for Chung, a Dongyang University professor, over 11 charges that include obstruction of business, embezzlement and involvement in the destruction of evidence.

The 57-year-old is alleged to have been involved in fabricating a college presidential citation in relation to her daughter’s academic admission.

She also faces allegations of embezzlement and capital market law violation for a 1 billion won (US$851,281) PEF investment by herself and her two children.

Chung has denied all allegations.

Chung’s health problems did not appear to affect the court’s decision. Citing MRI test results, her legal representatives said she was recently diagnosed with a brain tumor and a cerebral blood blockage.

But the court apparently judged that her health conditions show she can endure the probe while under detention.

The latest developments come a week after Cho abruptly resigned amid controversy about whether he was suitable for the Cabinet post.

A key architect for President Moon Jae-in’s drive to reform the prosecution, Cho was appointed on Sept. 9 despite objections from opposition parties.

Supporters of Cho called for thorough reform of the elite investigative agency and branded the prosecution’s probe into his family as politically charged.

The court’s decision sparked mixed responses from those for and against Cho’s family.

Supporters of the former minister condemned the decision and pledged their plan to keep holding candlelight vigils to prevent the judiciary sector from handing down what they call a false ruling.

But those against Cho’s family welcomed the decision, claiming that Cho should be also arrested.