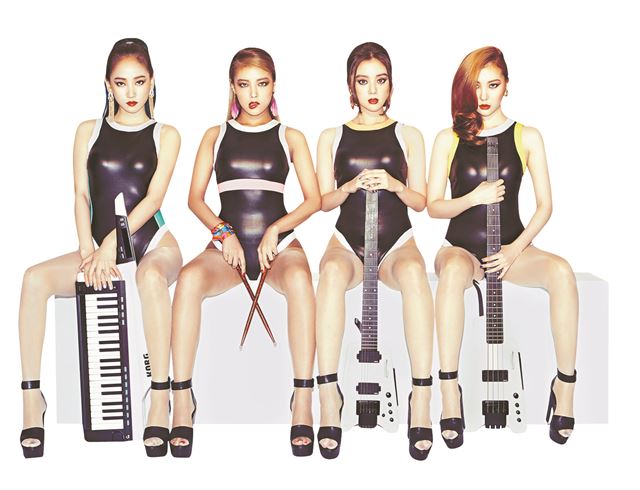 The Wonder Girls have announced that they will transform into a four-member rock band, shedding their dance group image. (image: JYP Entertainment)

“We were very nervous because it was the first time that we performed as a band,” Seonmi, a member of the group, told reporters during a showcase of the group’s new album in Seoul. “This is not an one-time event, but a totally new beginning.”

The Wonder Girls have announced that they will transform into a four-member rock band, shedding their dance group image, after Seomni, a former member, rejoined the team recently.

Since they decided to turn into a rock band at the suggestion of Park Jin-young, singer and head of their management agency JYP Entertainment, they have practiced for more than a year and a half to carry out the transition.

The band now has Yeeun as a pianist, Yoobin as a drummer, Seonmi as a bass guitarist and Herim as an acoustic guitarist.

“Yoobin was learning drums and Herim acoustic guitar while I already knew how to play keyboard,” Yeeun said. “Seomni then began to learn bass guitar and that became the starting point (of the formation of the band).”

They released “Reboot,” their third full-length album, to online music sites on Monday. The album is to hit street record stores the next day.

“I Feel You,” the title track in the new album, landed at No. 1 on various online music charts upon its release at noon.

The four members also drew media attention for taking part in the album’s production process, writing and composing all the songs except for the title track.

They created polished songs through their own reinterpretation of various pop musical genres of the 80s such as “freestyle,” “retro pop,” “retro dance” and “slow jam,” according to JYP.

After debuting in 2007 with the single album “The Wonder Begins,” Wonder Groups gained fame for such hit songs as “Tell Me,” “So Hot” and “Nobody.”

The group provisionally halted its activities in June 2012, following the marriage of one of its five members, Sunye, and the expiration of vocalist Sohee’s contract with the agency.

The agency announced the two members’ official departures from the group last month.’