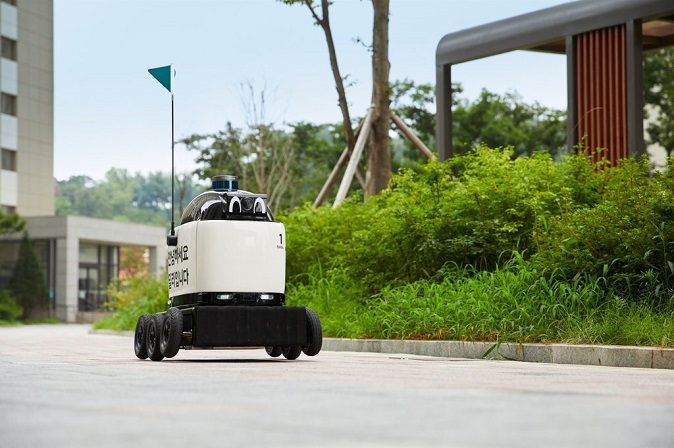 This photo provided by Woowa Brothers shows the company’s food delivery robot Delidrive. The robot will be put into service between an apartment complex and nearby restaurants in Suwon, south of Seoul, with residents there able to order food via the app.

Woowa Brothers plans to complete the development of the self-driving delivery robot by the first half of next year.

To this end, the company signed an agreement with Internet of Things (IoT) specialist HDC I-Controls Co. for the establishment of a robot delivery service system.

Under terms of the agreement, the two parties will strive to connect Woowa Brothers’ food delivery robot with HDC I-Controls’ home IoT service aimed at enabling the robot to deliver food from a restaurant in an apartment complex’s shopping arcade directly to residents.

Once the server and the robot are connected, the robot would be enabled to freely use the communal porch of the apartment building, while allowing each household to check the delivery process.

“Once the technological connection is completed, the process in which the robot departs from a restaurant in an apartment complex’s shopping mall and passes through the main entrance on the first floor and takes an elevator to arrive in its destination would be smoothly carried out,” Woowa Brothers said.

In addition, the company plans to launch a pilot of a food delivery robot that has an integrated indoor and outdoor autonomous driving function within the first half of next year.