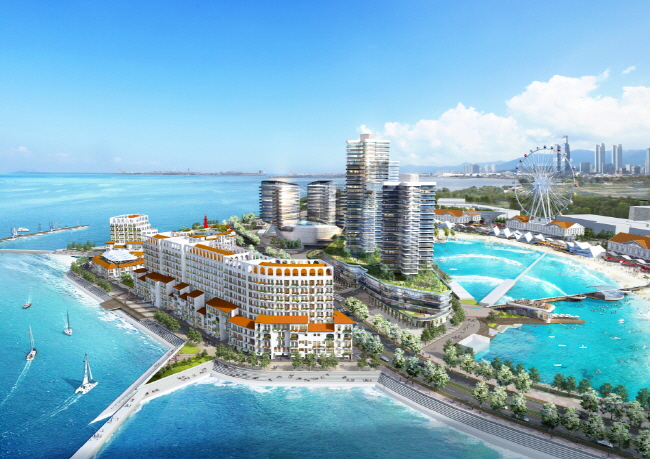 The surfing park is expected to create 1,400 jobs in tourism and sports and attract more than 2 million visitors each year. (image: Yonhap)

SEOUL, Nov. 23 (Korea Bizwire) — One of the world’s largest surfing parks will open in Sihwa MTV (Multi-techno Valley), Gyeonggi Province, by the end of 2020.

Lee Jae-myung, Governor of Gyeonggi Province; Lim Byeong-taek, head of Korea Water Resources Corp. (K-water); and Choi Sam-seop, President of Daewon Plus Construction signed a memorandum of understanding for the development of the Siheung Surfing Park on Thursday.

Daewon Plus Construction will sign a land sale contract with K-water and begin construction as early as next year. Additional facilities including hotels, convention centers and marinas will also be built by the end of 2023.

The surfing park and other facilities will be built inside the marine leisure complex located in Sihwa MTV. The project is expected to cost around 563 billion won.

The surfing park is expected to create 1,400 jobs in tourism and sports and attract more than 2 million visitors each year.

“As soon as the construction of the park is complete, the province will review the possibility of designating Geobukseom Island and neighboring areas as a special tourist zone.”

Fernando Odriozola, the head of Spain-based Wavegarden, which holds critical technology for building artificial waves; Antonio Estevez Marin, an advisor on commercial affairs for the Spanish Embassy; and Roger Royo, Secretary General at the Spanish Chamber of Commerce Korea were also present at the signing of the MOU, vowing to provide technological assistance.