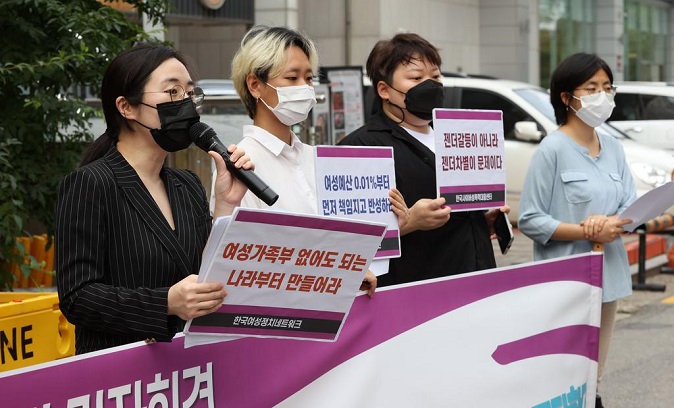 Women’s rights advocates stage a protest rally in front of the headquarters of the People Power Party in western Seoul on July 9, 2021, denouncing campaign pledges by two of the party’s presidential contenders to abolish the gender equality ministry. (Yonhap)

SEOUL, March 14 (Korea Bizwire) — The dramatic victory of the conservative President-elect Yoon Suk-yeol is leading to opposition from women in their 20s and 30s.

In protest against his policies and pledges that are seen as anti-women, many young Korean women are stepping up to ‘boycott childbirth’ during his presidency.

A number of posts on online communities talked about “not giving birth to children during Yoon’s presidency”, some calling upon others to bring the already low birth rate to zero.

“President Yoon will step aside from ensuring women’s rights, which will only make marriage and childbirth some kind of a fairy tale,” one of the posts said. “Women’s survival comes first. We can no longer afford to have children.”

Such sentiment among women in their 20s and 30s comes after Yoon’s pledge to abolish the Ministry of Gender and Equality and punish those who make false claims of sexual crimes more severely.

Some, however, express doubts about the movement’s impact, since South Korea’s birth rate has already been on a downturn regardless of Yoon’s victory.