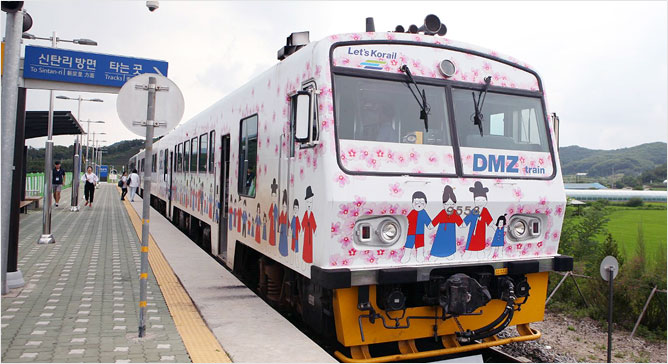 A DMZ train run by Korea Railroad Corp., or Korail. (image: Ministry of the Interior and Safety)

SEOUL, Jul. 9 (Korea Bizwire) — Student-run organizations of all ages have come together to launch a support group that advocates for a so-called “unification train” bound for the North Korean capital of Pyongyang by way of Yongsan Station in Seoul.

The network of students composed of members of youth organizations and college student unions revealed their plans yesterday at Yongsan Station.

The student-run organizations stated that Korean society at large had shown great interest in the cultural exchanges between the students of South and North Korea in the 1990s and early 2000s.

“As the era of division comes to an end, we are pushing forth a unification train headed for Pyongyang,” said the students.

The students also reiterated a clause from the Panmunjom Declaration which states that the two nations would connect the railway from Seoul to Pyongyang.

“As the railway already links South and North, we students would like to visit Pyongyang following the railway,” added the students.

In July, the students plan to hold a meeting to discuss the agenda ahead in addition to opening classes on how to better understand North Korean society.

In August, the student groups will be holding a “Unification Exhibition” that will help raise public awareness of some of the issues that the two nations must discuss in the face of unification.

The ultimate goal of the groups, however, is to realize the goal of having 3,000 students visit North Korea by taking the “unification train” bound for Pyongyang.