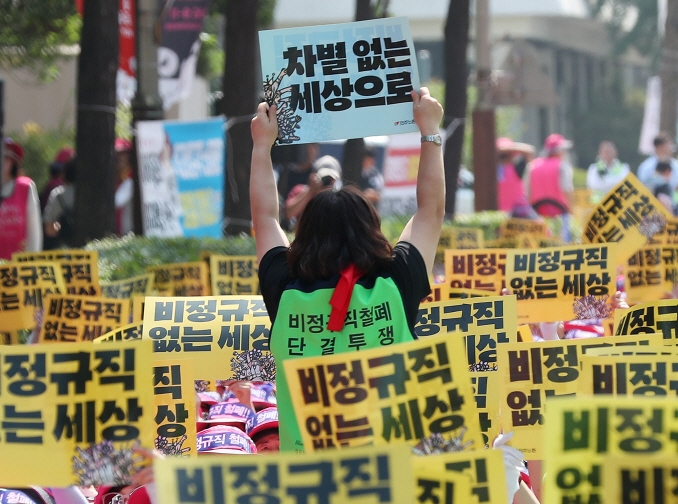 Non-regular school workers hold a protest rally Incheon, west of Seoul, on July 4, 2019, calling for wage hikes and eliminating discrimination against them. (Yonhap)

SEOUL, Jul. 4 (Korea Bizwire) — About 17,000 contract school workers walked off the job on the second day of a strike by non-regular public employees on Thursday, paralyzing cafeteria operations and other supplementary services at 1,700 schools nationwide, the government said.

According to the Ministry of Education, 17,342, or 11.4 percent, of the 151,809 non-regular workers hired by 10,584 public kindergartens and elementary and secondary schools, were participating in the three-day strike called Wednesday by the Korean Confederation of Trade Unions, a militant labor umbrella group.

On the first day of the strike, more than 22,000 non-regular school workers, mostly cafeteria cooks and after-school daycare service assistants, walked out, calling for a basic pay hike of 6.24 percent and eliminating discrimination in the payment of various allowances.

At 2,177 schools, including 158 in Seoul and 525 in Gyeonggi Province, cafeteria lunch services were suspended.

Excluding 406 schools that finished classes before noon due to exams, 1,771 schools halted the provision of cafeteria lunches.

Of them, 1,194 schools offered substitute foods like bread and milk, while students at 377 schools were asked to bring their own lunch. The remaining 109 schools simply shortened their timetable. 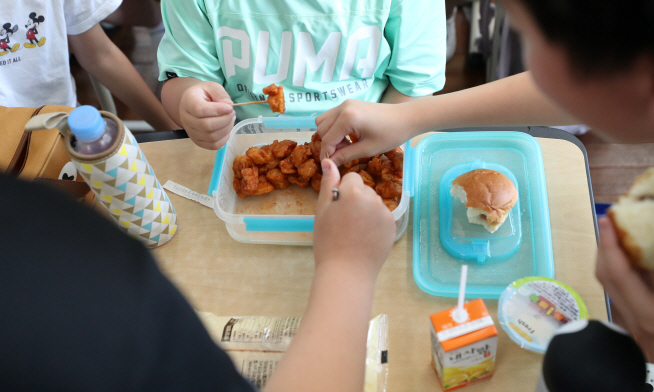 Pupils at an elementary school in Busan share a lunch box and substitute food as their cafeteria suspended its meal service due to a strike by contract workers on July 4, 2019. (Yonhap)

The ministry noted a total of 8,277 schools operated their cafeterias normally for lunch service on Thursday, up from 6,891 schools the previous day.

It also said the after-school daycare service was suspended at 92, or 1.5 percent, of the 5,980 public elementary schools nationwide.

The striking workers have also demanded that their wages be raised to a level equivalent to 80 percent of the lowest-ranking civil servants’ pay from the current 60 percent during the tenure of the Moon Jae-in government.

The education authorities have proposed a pay hike of 1.8 percent for the non-regular employees.