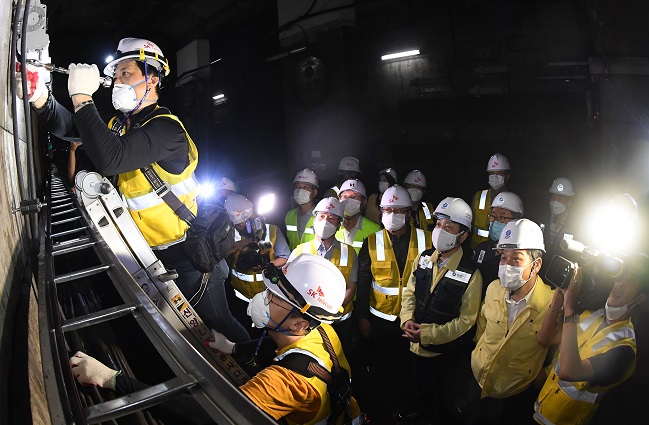 Telecom operators install 5G equipment at a tunnel near Euljiro 1-ga station on Seoul Metro’s Line No. 2 on July 23, 2020. (Yonhap)

SEOUL, Oct. 19 (Korea Bizwire) – The average accessibility of the fifth-generation network in major subway lines in South Korea reached over 75 percent, a lawmaker said Monday, as the country races to boost nationwide coverage.

The high-speed network’s accessibility stood at 76.3 percent across 12 subways lines in six major cities across the country, according to Rep. Kim Sang-hee of the ruling Democratic Party, citing data from the Ministry of Science and ICT.

In July, they said 5G networks were installed in the capital region’s subway Line No. 9 and eight other subway lines in four major cities, including the southern port city of Busan.

The latest generation network’s availability, however, was far below the national average in certain subway lines in the capital, the lawmaker said.

The network’s availability in Seoul Metro’s Line No. 3 and No. 8 both stood at around 27 percent. Only Line No. 9 had availability higher than the national average, at 89 percent, out of the five subway lines in the capital surveyed by the ICT ministry.

The lawmaker called for better availability of the network in the capital’s subways, saying the cumulative number of people who used the subways reached 2.7 billion last year.

South Korea had 8.66 million 5G users as of August, accounting for 12.4 percent of the total 70 million mobile accounts in the country.

The three carriers promised in July to install 5G in all subway lines across the capital metropolitan region by mid-next year.