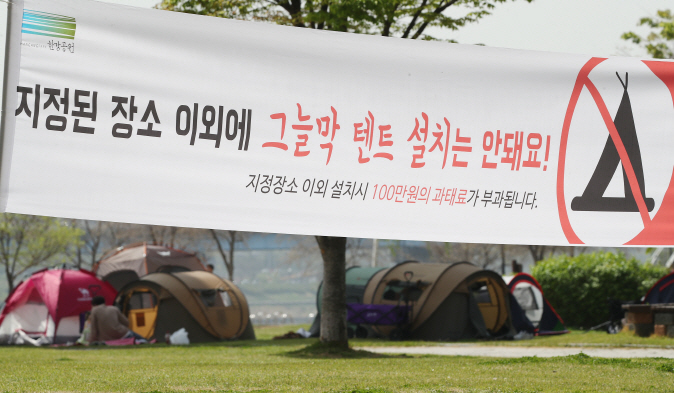 In April, the city said it would designate 13 tent zones in the Han River park and impose a fine of 1 million won (US$830) for those who violate the new regulations that ban the use of tents outside of certain hours. (Yonhap)

SEOUL, Aug. 2 (Korea Bizwire) — Citizens are satisfied with Seoul’s designation of specific tent zones and detailed operating regulations along the Han River, according to a recent survey.

According to a survey of 500 citizens, 93.6 percent approved of a rule that requires citizens to open more than two sides of their tent when they set up tents along the Han River, the Seoul Metropolitan Government said Thursday.

The city reported that 80.4 percent of the citizens were aware of the rule. The same proportion of the respondents said that citizens who use tents think they are complying with the standards.

However, some 6.4 percent opposed to the criteria citing “concern over privacy” and “infringement of individual autonomy.”

The public awareness of the designation of tents allowed was 87.4 percent, and approval of zones was 93.6 percent.

Some 86 percent approved of opening the tent area from 9 a.m. to 7 p.m. On the other hand, 14 percent disapproved, citing “the need for extended hours at night.”

Regarding measures to improve the cleaning of Han River parks, such as putting real names on trash bags sold at the river stores and designated bulletin boards within delivery zones, 94.8 percent answered positively.

“The improvement measures implemented to solve problems such as damage to green spaces, damage to the view of the Han River, interference with the use of the river, and pollution of streams caused by trash have received positive responses,” said Jeong Su-yong, assistant mayor for Hangang Project Headquarters.

In April, the city said it would designate 13 tent zones in the Han River park and impose a fine of 1 million won (US$830) for those who violate the new regulations that ban the use of tents outside of certain hours, and require two sides to remain open at all times.