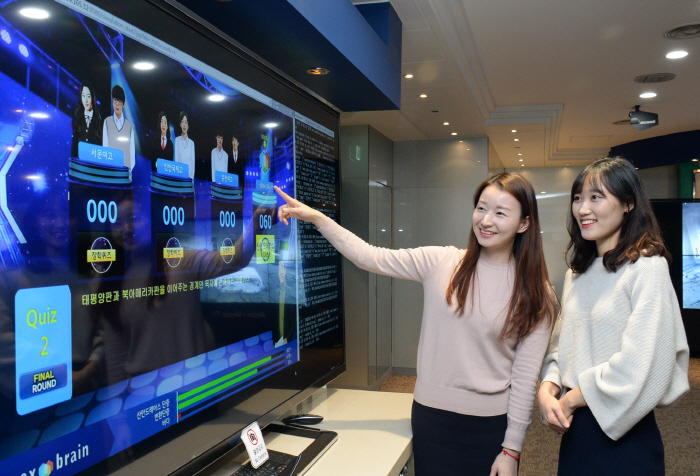 During the competition on Friday, Exobrain will use its Korean analysis algorithm to comprehend the question, and its language data to search for up to thousands of candidate responses, ultimately arriving at its final answer. (image: SK)

DAEJEON, Nov. 15 (Korea Bizwire) – In yet another challenge of man versus machine, the Electronics and Telecommunications Research Institute announced Monday that its AI software Exobrain will participate in the SK-sponsored scholarship program Janghak Quiz on Friday.

Exobrain is a deep learning AI software that can be used in a multitude of domains. It can understand natural language, accumulate knowledge from encyclopedias, and put together multiple sentences to understand and process a given question.

According to the institute, Exobrain has so far learned some 120,000 encyclopedia books worth of information, and in converting languages it digested from Korean and Chinese character dictionaries into its knowledge capacity. Since September, it took part in ten simulated quiz matches with former Janghak Quiz winners, brushing up on its weaknesses, said ETRI.

During the competition on Friday, Exobrain will use its Korean analysis algorithm to comprehend the question, and its language data to search for up to thousands of candidate responses, ultimately arriving at its final answer. It will not use external information from web searches, and will be limited to the data contained on its server.

Exobrain still lacks voice recognition ability, so the questions will be inputted via keyboard. Voice recognition is among the technologies that ETRI plans to implement in future generation Exobrains, an official said.

Other setbacks include solving questions that require complicated deductions, mathematical calculations, or those that need sight or audio-based decisions.

“Domestic AI technology is in its early stages, and still lags behind global standards,” said ETRI researcher Han Dong-won. “But our project’s significance lies in the fact that we introduced the first Korean AI, which will serve as a cornerstone technology for the fourth industrial revolution.”

The Exobrain project began in 2013 with the support from the Ministry of Science, ICT and Future Planning, and the ultimate goal of developing an artificial brain that can communicate with humans beyond simple conversation, and aid in professional decision-making.