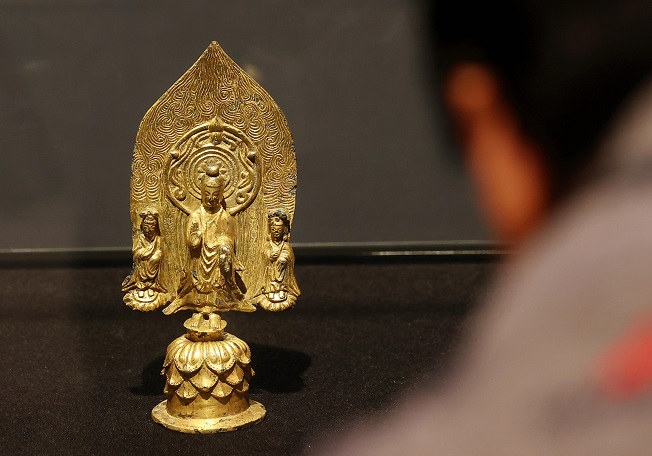 This photo shows the Gilt-bronze Standing Buddha Triad with Inscription of Gyemi Year on display at the headquarters of the K Auction in southern Seoul on Jan. 17, 2022. (Yonhap)

SEOUL, Jan. 27 (Korea Bizwire) — Two national treasures from the collection of the Kansong Art Museum were put on auction in Seoul on Thursday but failed to attract any bids.

The two Buddhist relics — the Gilt-bronze Standing Buddha Triad with Inscription of Gyemi Year and the Portable Shrine of Gilt-bronze Buddha Triad — were put up for sale at the headquarters in southern Seoul of South Korea’s second-largest auction house K Auction.

The bidding prices started at 2.8 billion won ($2.3 million) and 3.2 billion won, respectively, but the auction quickly ended with no offers.

The event attracted wide media attention as it was the first time national treasures had been put up for sale.

The Gilt-bronze Standing Buddha Triad with Inscription of Gyemi Year is thought to be from the 6th century during the Baekje Kingdom (18 B.C.-A.D. 660) judging from the inscription on the back of the mandoria.

The Portable Shrine of Gilt-bronze Buddha Triad, a miniature version of a Buddhist shrine inside a temple, is believed to have been made in the 11-12th century during the Goryeo Dynasty (918-1392). 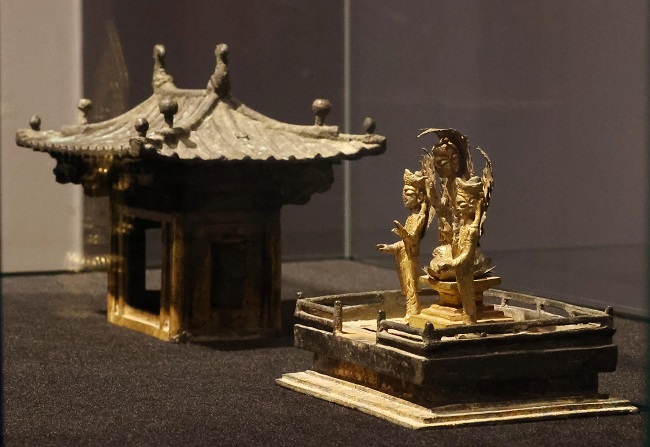 This photo shows the Portable Shrine of Gilt-bronze Buddha on display at the headquarters of the K Auction in southern Seoul on Jan. 21, 2022. (Yonhap)

The two were collected by Jeon Hyeong-pil (1906-1962), the late founder of the museum, with his personal assets, while Korea was under the Japanese colonial rule.

They were designated as national treasures in 1962 and are now reportedly owned by his grandson Jeon In-geon, head of the museum.

Faced with financial difficulties, the museum has been selling works from its collection in recent years, including two rare Buddhist statues put on auction in 2020.

The statues were purchased by the National Museum of Korea after they failed to attract bids in the auction.