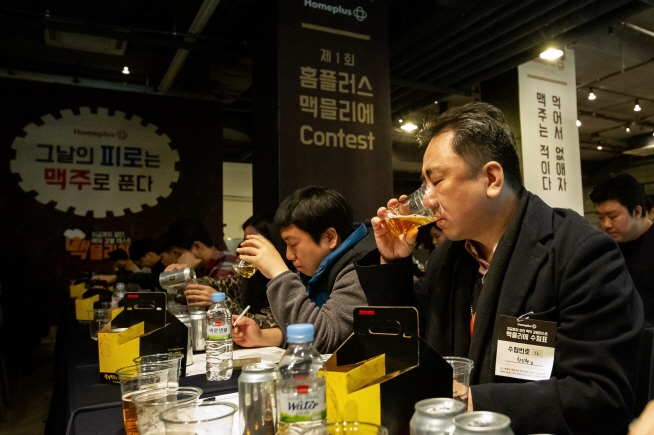 Among 10,000 participants, 200 finalists who made it through the preliminaries measured their beer knowledge and discrimination skills at JBK Convention Hall on December 15. (image: HomePlus Co.)

SEOUL, Dec. 17 (Korea Bizwire) — Supermarket chain HomePlus Co. said on December 16 that 27 ‘Maekmmelier’ had been chosen via ‘The First Maekmmelier Contest’ in which participants measured their beer mania skills with others.

Maekmmelier is a combination of ‘maekju’, the Korean word for beer, and ‘sommelier,’ and refers to one whose beer mania skill is acknowledged.

Among 10,000 participants, 200 finalists who made it through the preliminaries measured their beer knowledge and discrimination skills at JBK Convention Hall on December 15.

The owner of Vaneheim Brewery, Kim Jung-ha, who is the first woman brew master in Korea and is frequently called on to judge international beer contests, also participated.

The final round was completed with a written test (60 points) and performance test (40 points) such as audio-visual quiz.

The written test included difficult questions such as ‘When did Wilhelm Ⅳ announce the German Beer Purity Law?’. The final 27 participants who obtained more than 70 points received a ‘Maekmmelier ID card’.

They will get a chance to taste new imported beer sold at HomePlus and help the company develop new products. The winner, who scored 84 points, said, “Drinking a lot of beer was a big help”.