When one of the cast members spoke during the press conference, their speech was first interpreted into Korean then interpreters sitting behind the cast had to re-interpret the words into the different languages spoken by the actors. (image: Yonhap)

When one of the cast members spoke during the press conference, their speech was first interpreted into Korean then interpreters sitting behind the cast had to re-interpret the words into the different languages spoken by the actors. Joining Lee Ki-woo from Korea were six other cast members, all from different countries.

Babel 250 features seven individuals from seven different countries, all speaking different languages, trying to come up with a common language to communicate, which roughly resembles the story of the Tower of Babel.

The cast includes an actor, investor, dancer, former beauty pageant contestant, and concert director – not your typical TV personalities except for Lee Ki-woo, a Korean actor.

All of the cast members said they were stressed and anxious in the beginning because of the language barrier, but soon learned how to communicate beyond just language, and had a great time together.

“It is a once in a lifetime kind of deal,” they all agreed.

Matheus Oliverio da Silva Rego from Brazil is a samba dancer, and he travels back and forth from Korea to Brazil every time he finishes shooting the show because he will be performing at the opening and closing ceremonies of the 2016 Summer Olympics, which will take place in Rio de Janeiro, Brazil. 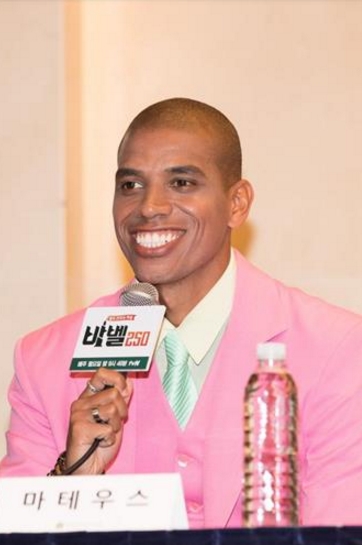 “I love adventure. I think this show will be a turning point of my life. I get to experience so many different cultures as if I’m actually traveling in those countries,” said Matheus.

Chen Lin, a professional concert planner, said she, too, planned on taking trips to some countries this year, but the Babel 250 show feels like a similar experience.

“All of our personalities and cultural backgrounds are different, but that’s what makes everything more exciting. I’m glad that I get to teach others about Venezuelan culture and learn about theirs,” said Michelle Marie Bertolini Araque, a former Venezuelan tennis player, model, and beauty pageant titleholder.

The program director of the show, Lee Won-hyung, emphasized that he aims to create an ideal community or a utopia of seven individuals who do not share the same language.

“The first three episodes focus on how well they get along despite not being able to understand each other. Starting with the fourth episode, they will actually start working on building the Babel language,” said Lee.