SEOUL, May 26 (Korea Bizwire) — K-pop act Monsta X on Tuesday thanked fans for helping them achieve a career-changing success in the United States earlier this year.

“All we have are happy memories when looking back. Our hearts swell up with emotions,” Monsta X rapper I.M, whose real name is Im Chang-kyun, said during a media showcase for the band’s new EP album, “Fantasia X,” held in Seoul.

Monsta X made huge strides in the U.S. market earlier this year, with their first English-language record, “All About Luv,” reaching as high as No. 5 on the Billboard 200 albums chart in February.

The group, signed to Starship Entertainment, became the third K-pop act ever, after BTS and SuperM, to make the top five on the album tally.

During their media promotion blitz in America, the six-man act landed appearances on several music shows on major networks, including NBC and MTV.

“It was such an honor and blessing for us to be able to appear on such programs. We know it was due to fan requests,” I.M noted. 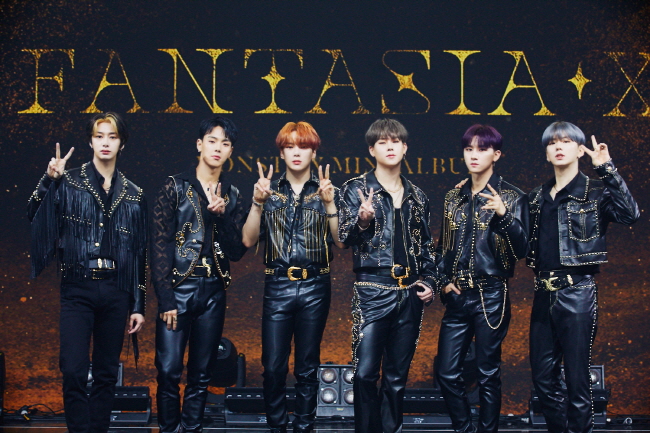 This photo provided by Starship Entertainment shows boy band Monsta X posing for photos during a media showcase for the group’s new EP record, “Fantasia X,” held in Seoul on May 26, 2020.

“We think the ever-shifting nature of K-pop, constantly transforming accordingly with the times and genres, is the charm of K-pop,” the band said.

“Fantasia X” is Monsta X’s first Korean-language album in seven months. It has brought together all of the band’s six members, including main rapper Jooheon, who has been absent due to health issues.

Its release, originally scheduled for May 11, was postponed following a back injury of member Shownu.