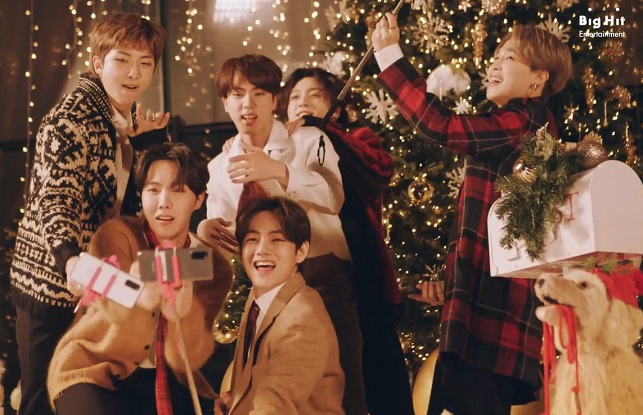 This photo, provided by Big Hit Entertainment, shows BTS singing in the music video for the holiday remix version of its hit song “Dynamite.”

The rebound came following the release of the song’s holiday remix on Dec. 11. The song’s sales jumped 227 percent to 40,000, while streams were up 7 percent to 8.5 million, it added.

The holiday remix of the song has the addition of Christmas carol-like sounds in the background with a festive and hearty mood.

The chart-topper this week for the Hot 100 was Taylor Swift’s “Willow,” the main track of “Evermore,” the singer’s latest album released earlier this month, according to Billboard.

Billboard also said “Dynamite” rebounded to the top of the Global Excl. U.S. Chart this week from the No. 3 spot last week.

BTS is set to perform at an online year-end concert featuring artists from Big Hit’s labels on Dec. 31.