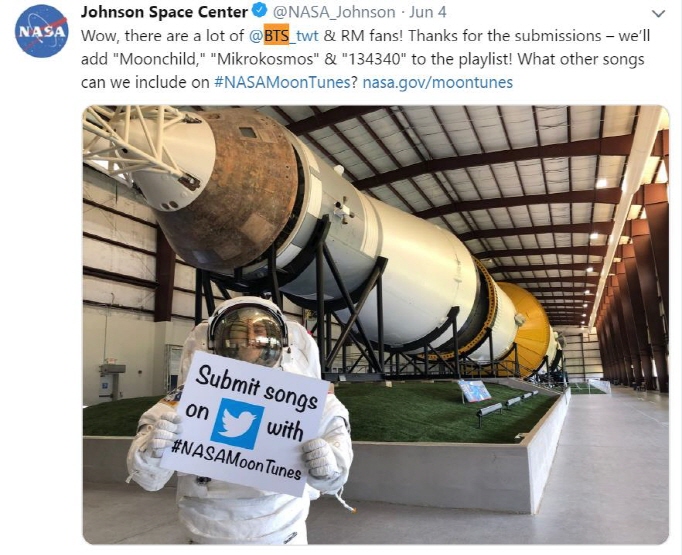 This image of a Twitter feed is captured from the account of NASA’s Johnson Space Center. (Yonhap)

SEOUL, Jun. 7 (Korea Bizwire) — Three BTS songs will hit the playlist of the American space agency’s next journey to the moon as the agency is planning to make another lunar landing by 2024, the agency’s SNS feeds have shown.

In a Twitter feed Tuesday, the Johnson Space Center of the National Aeronautics and Space Administration (NASA) said three BTS songs — “Moonchild,” “Mikrokosmos” and “134340″ — will be added to the playlist for the planned lunar journey.

“Wow, there are a lot of BTS & RM fans! Thanks for the submissions — we’ll add ‘Mooonchild,’ ‘Mikrokosmos’ & ’134340′ to the playlist!” the Twitter message said, with a photo of a NASA employee in a space suit.

The message came one day after the NASA training center invited people to recommend songs fit for the lunar journey in celebration of this year’s 50th anniversary of the Apollo human spaceflight program.

Astronauts Neil Armstrong and Buzz Aldrin reached the moon in a command and service module, and walked on the lunar surface on July 20, 1969, on the Apollo mission.

The invitation seems to have moved a lot of BTS fans to pitch the band’s music for the proposed playlist.