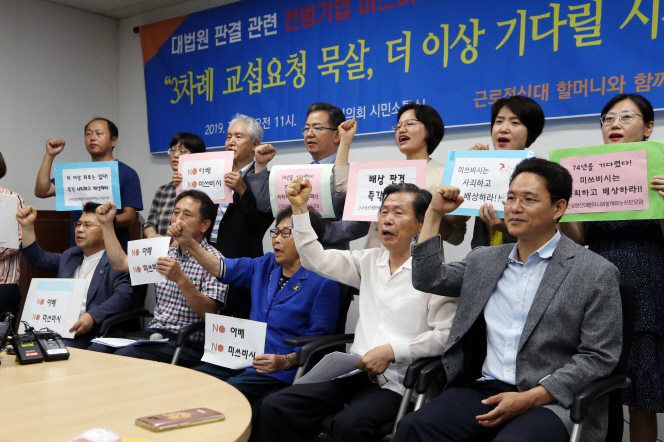 Members of a civic group raise their fists during a press conference in the southwestern city of Gwangju on July 23, 2019. (Yonhap)

The civic group announced the move against the Japanese firm at a press conference in the southwestern city of Gwangju.

The application came after Mitsubishi Heavy ignored the deadline of July 15, set by the victims’ lawyers, for a third time to agree to compensation talks with the Korean victims for forced labor during World War II.

Lawyers of the victims had asked for consultations with Mitsubishi three times before launching procedures to dispose of its seized assets.

The South Korean Supreme Court ruled last November that Mitsubishi must award up to 120 million won (US$101,600) each to 12 forced labor victims and their family members in two landmark rulings on forced labor cases.

In March, a district court in the central city of Daejeon ordered the seizure of two trademark rights and six patents of Mitsubishi after the Japanese company refused to heed the top court’s compensation order.

“We can’t stay up waiting for the Japanese company to agree to our demand any longer,” said the group, which deals with colonial Japan’s recruitment of Koreans for forced labor.

The wartime forced labor was a crime against humanity arising from Japan’s colonization of Korea and could not take place without the involvement of Japan’s state power, which makes the Japanese government take final responsibility over the issue, it said.