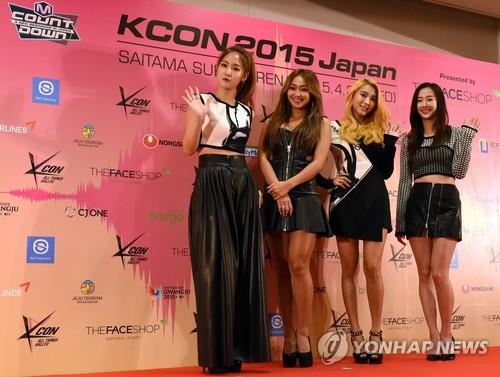 South Korean girl group SISTAR members pose during a press conference prior to attending a K-pop concert at KCON 2015 Japan in the Saitama Super Arena in Saitama on April 22, 2015. (image: Yonhap)

SEOUL, April 28 (Korea Bizwire) — A K-pop festival hosted by South Korea’s leading content and media company CJ E&M will expand to the east coast of the U.S. from the west coast this summer, the company said Tuesday.

KCON launched in 2012 and has quickly developed to be North America’s largest annual Korean cultural festival that incorporates K-pop concerts with a marketplace showcasing a variety of Korean products and trends. Last year’s event attracted some 40,000 fans to Los Angeles.

Last week, KCON was held in Saitama, north of Japan, for the first time in Asia.

The events in the U.S. will feature the hottest K-pop artists such as G-Dragon, Girls’ Generation, IU, Teen Top, Vixx, B1A4, BTS, CNBLUE, Jung Joon-young and SPICA, according to the organizers.

Sponsored by Toyota, KCON 2015 USA will showcase all fields of hallyu, the Asianwide popularity of Korean pop culture, through such activities as a K-pop dance cover competition, make-up tutorials and Korean language classes, they said.

Throughout the convention, dozens of small- and medium-sized Korean companies hoping to advance to the U.S. market will be invited to set up booths for promoting their brands and products.

“We’re proud to announce the expansion of KCON in North America this year, following successful events in Japan last week. By hosting events on both west and east coasts of America, KCON 2015 USA will show our global business partners that now is the time for K-culture and KCON to shine as a new business model,” said Shin Hyung-kwan, an executive of the CJ E&M in charge of KCON 2015 USA.