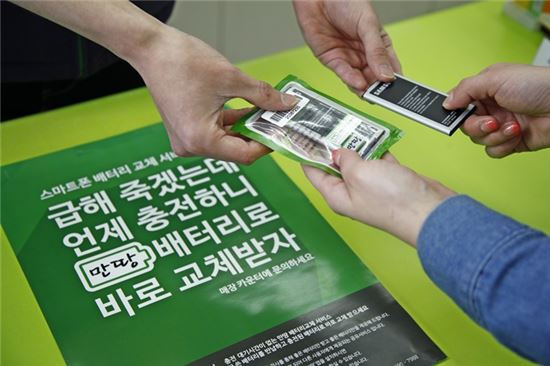 The service will be available for all battery-replaceable smartphone models. (image: BGF Retail)

BGF Retail, the company behind the CU convenience store chain, announced on April 14 that it would begin the battery replacement service in May. The service offers fully charged smartphone batteries to smartphone users in exchange for their discharged ones, after verifying their authenticity.

Convenience stores including CU currently offer battery-charging services, which can take up to 40 minutes. By introducing the replacement service, customers can save time while paying the same 3,000 won (US$2.74) fee.

The service will be available for all battery-replaceable smartphone models, and CU will continually add batteries for new models.

However, the service is not available at all CU convenience stores, but only shops that have chosen to participate in the program. CU stores offering the service can be found using the new “Full-charge” smartphone application.

CU explained that the service was devised to solve the issue of rapidly depleted smartphone batteries, leveraging the accessibility of convenience stores.

An official at BGF Retail said, “As more people use smartphones, there is much anxiety about battery life. By offering the service, we are presenting a convenient option to customers as they can replace the worn-out smartphone batteries like they are purchasing drinks in our stores.”

Meanwhile, CU convenience stores are now transforming from simple stores selling items such as snacks, drinks and other daily necessities to “space” providers with lockers, meeting rooms and concert halls.

CU’s Itaewon Freedom offers a private locker service that was launched in December of last year, and some stores in university areas have started to offer meeting rooms equipped with tables, whiteboards, and HD TVs for those who seek spaces suitable for small-sized meetings.

In Daehangno, where many performers and audiences gather together, the CU Marronnier Park store is equipped with a small-sized stage for amateur musicians, and even supplies sound and lighting equipment. It was developed to offer customers the pleasure of enjoying cultural performances highlighting the regional characteristics of the area.