SEOUL, March 30 (Korea Bizwire) — Drones stole the show at the Winter Olympics last month while the lack of local sightseeing options was singled out as one of the drawbacks of the Winter Games held in Pyeongchang, according to a survey of 451 individuals (227 South Koreans, 224 foreigners).

Conducted by the Corea Image Communication Institute, 82.3 percent of the survey respondents said the drone performance during the opening and closing ceremonies were the main attraction.

Other noteworthy Olympic highlights named were the attendance of Ivanka Trump, Shinzo Abe and younger sister of North Korea’s leader Kim Yo-jong, and the marching of the North and South Korean athletic delegations under a unified Korean flag as well as the formation of a unified women’s hockey team.

Drone show during the opening ceremony of the Pyeongchang Olympics (Image: Yonhap)

Over 80 percent regarded positively the cultural performance during the opening and closing ceremonies, noting them as the aspect of the Olympics that elevated South Korea’s global image. 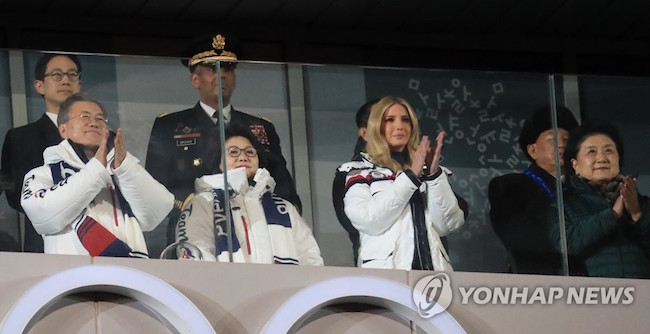 Meanwhile, insufficient local attractions, price-gouging by accommodations businesses and not enough restaurants were identified as the disappointing elements of the Olympics.