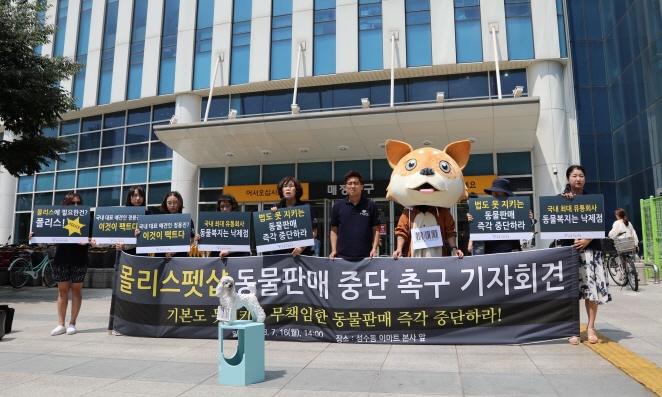 The association was also critical of the government for not managing and supervising the retail giant properly during a press conference held yesterday afternoon at E-Mart’s head office in Seongdong-gu, Seoul.

The association noted that after investigating 26 of the 35 “Molly’s” pet store chain outlets, all 26 stores were found to have breached guidelines that were outlined in the newly revised animal protection laws.

None of the stores had indicated the price of pets to be sold nor provided pet buyers with a contract, both of which are required by law.

Sixteen stores (61.5 percent) did not provide basic information about animals for sale regarding species, gender, date of birth, vaccination, and other medical records, while 10 stores (38.5 percent) did not display the registered license denoting the store as an official reseller of animals, which was also in contravention of formal regulations.

The Korean Animal Welfare Association also stated that at one store, a dead hamster was kept in the same space as other living ones.

After laws on animal protection were revised in March, the association checked various stores between June 19 and 29 to see if the new regulations were being abided by.

Previously, the association pointed out certain practices implemented by Molly’s as being problematic when “animals under two months old were found to be on sale” in 2012 and 2016, when the association carried out similar investigations.

The Korean Animal Welfare Association stated that the government should have ensured that retailers fully understood the new guidelines that are part of the revised laws, while checking to see if the guidelines were being adhered to after their implementation.

In response, E-Mart said that the association’s investigation had been carried out immediately after the new law came into effect, while the retailer’s pet stores were still trying to comply with new legislation that was implemented without a grace period.

The retail giant said that new measures have been carried out in all its pet stores to ensure that the new regulations are being upheld.