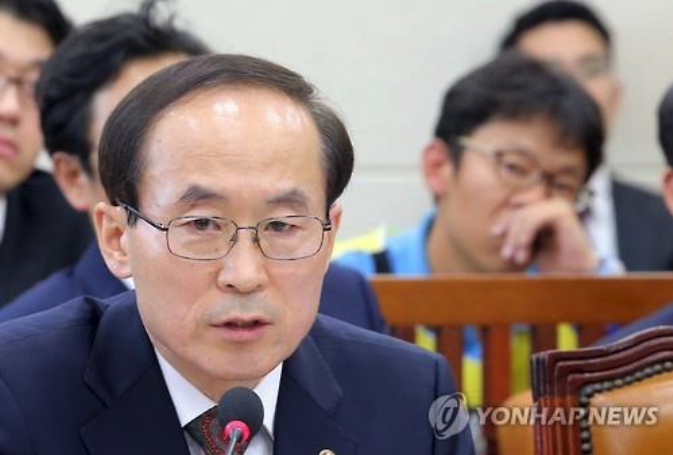 Environment Minister Yoon Seong-kyu speaks during a meeting with lawmakers at the National Assembly on May 11. (image: Yonhap)

SEOUL, May 11 (Korea Bizwire) – Environment Minister Yoon Seong-kyu offered an apology Wednesday over legal loopholes in controlling toxic humidifier sterilizers that are believed to have caused the deaths of more than 100 people.

The humidifier disinfectant case, one of the worst scandals involving a consumer product using chemicals, came to light after four pregnant women died of lung problems for unknown reasons in 2011. A government-led investigation confirmed a connection between more than 100 people who died of lung problems and the chemicals used to clean household humidifiers.

“(The government) feels a sense of responsibility for failing to preemptively deal with the case due to inadequate laws,” Yoon said during a meeting with lawmakers at the National Assembly.

Asked by an opposition lawmaker whether the government offers an apology, Yoon said, “I believe that the words literally mean that.”

The remarks come as the prosecution belatedly sped up an investigation into the case, summoning a former chief of the South Korean unit of Oxy Reckitt Benckiser over suspicions that the British firm manufactured the humidifier sterilizers in question.

Companies that made and sold the suspected sterilizers include market leader in disinfectant sales Oxy, along with Lotte Mart and Homeplus, two of South Korea’s largest retailers.

“So many people were victimized due to the lack of proper safety laws into the products and companies that only pursed their own interests,” Yoon said.