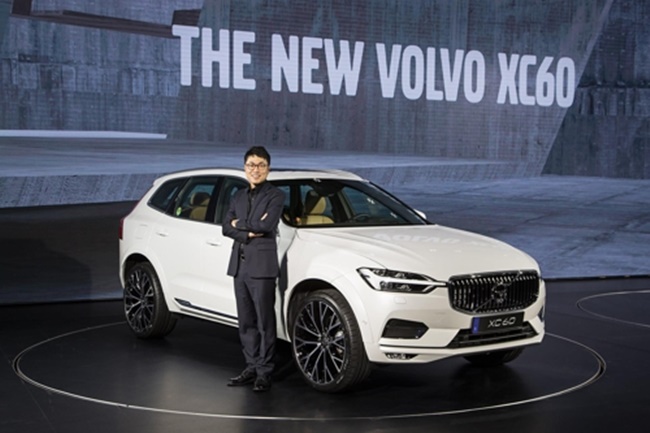 Lee, 38, is the first Korean designer at Volvo, as well as the senior designer that led the design team behind the new best-selling model XC60. He drew an unlikely link between Scandinavian designs and the beauty of empty space in Korea, during a press conference at the Grand Hyatt Seoul. (Image: Volvo Group Korea)

SEOUL, Sept. 28 (Korea Bizwire) – Swedish carmaker Volvo’s first South Korean designer Lee Jung-hyun says there are similarities between Koreans’ appreciation of empty space and the beauty of Scandinavian designs, which he reflected in the design of the new XC60.

Lee, 38, is the first Korean designer at Volvo, as well as the senior designer that led the design team behind the new best-selling model XC60. He drew an unlikely link between Scandinavian designs and the beauty of empty space in Korea, during a press conference at the Grand Hyatt Seoul.

Speaking to the press, Lee said, “The beauty of Scandinavian designs lies within emptiness and simplicity, just like how the beauty of empty space is appreciated in Korea. I believe these elements were reflected in the design of the new XC60.”

Lee, who currently works as a senior designer at the headquarters of the Swedish car manufacturer, studied mechanical engineering at a university in South Korea, but went to study abroad in Sweden to pursue his dream to become an automotive designer, a bold move that led him to land a job at Volvo in 2010.

Since then, Lee competed with some 30 other designers at the Swedish car manufacturer before being given the opportunity to lead the design of the all-new XC60 which has come back fully changed after 8 years.

The up and coming South Korean designer says his design philosophy can be described as ‘Lagom’, a Swedish word which means ‘not too much, not too little, but just enough,’ and the design of the new Volvo XC60 reflects Lee’s belief.

“I tried to show influences from the Scandinavian sentiment, while respecting the activeness and elegance of the XC60 series. I wanted to design a car that is timeless and not affected by trends much,” Lee said.

From the bonnet, the upward beltline that connects to the back of the car, coupled with the vehicle’s roofline and the D pillar that add to speediness, all contributed to the XC60’s dynamic and strong image.

Lee says when he saw the first generation of the XC60 series, it reminded him of Korean bows, and thought of coming up with designs that would work with South Korean consumers.

“I thought of the kind of cars my friends, my father and I would want to ride in hopes of better sales performance in the South Korean market. I believe the mixture of the Swedish brand’s design philosophy and the South Korean sensibility will prove competitive,” Lee said.