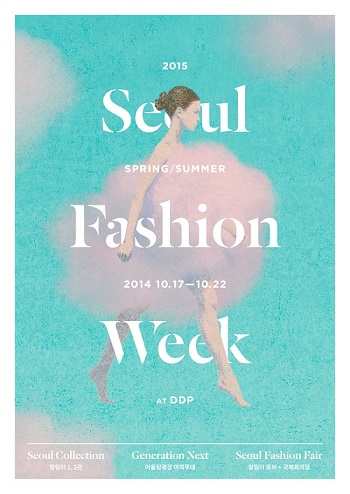 The fashion week will consist of several events including Seoul Collection, Generation Next and Now Buying. (image: Seoul Design Foundation)

SEOUL, Oct. 15 (Korea Bizwire) — The 14th Seoul Fashion Week Spring/Summer 2015 is planned to be held from October 17 to 22 at Dongdaemun Design Plaza in Seoul.

The fashion week, hosted by the Seoul metropolitan city government and jointly organized by the Seoul Design Foundation and the Council of Fashion Designers of Korea, will consist of several events including Seoul Collection, Generation Next and Now Buying.

The global show is expected to enhance Seoul’s image as a global fashion city and help Korean talents in design expand their business in the global market.

Blooming Night, a nocturnal fashion show, will make the beginning of the fashion week at midnight on the 18th.

Asia’s rising designers and brands such as Bangkok designer Wonder Anatomie, Thailand clothing brand “Dry Clean Only” and Japanese designer Roggykei are going to partner with Korean designers including Alogon’s Shin Yong-kyun and Sujinlee’s Lee Su-jin to appear in the fashion show.

Fifty five top designers in South Korea including Ji Chun-hee, Lee Sang-bong, Park Yun-su, KYE and SteveJ & YonieP will showcase their items in Seoul Collection for six days. Twenty five up-and-coming rookies who have their own fashion brands plan to show their creations on the stage of Generation Next from the 17th to the 21st, which will be a gateway for them to boost their brand image.

There will also be an opportunity, called Now Buying, for buyers and designers to meet with each other during the full event. A lot of clients such as French department store Galerie Lafayette, U.S. department store Saks Fifth Avenue and famous select shop MC2 are going to meet Korea’s renowned designers to collaborate with.

A charity event called Give Donation will be offered during the event. Not only financial donation but also art toys produced by designers to be sold will help children through humanitarian advocacy group Save the Children.

“Seoul Fashion Week is a festival for designers, buyers, and citizens. We will try our best to upgrade the event to a global fashion festival,” Baek Jong-won, chief of the foundation said.