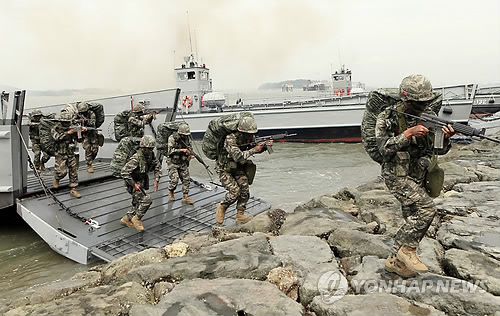 The victory commemoration “Incheon Landing Operation and Wolmi Festival” will be held at Wolmi Island from September 12 to 15. On September 15, the 65th anniversary, the Korean Navy and a unit from the U.S. Navy will reenact the operation by deploying special forces, 12 battle ships and 17 aircraft. (image: Yonhap)

INCHEON, Sept. 7 (Korea Bizwire) – As fireworks and a rock concert have been included by organizers at a forthcoming event to commemorate the victory of the Incheon Landing Operation during the Korean War, some groups are raising concern that the real reasons for the commemoration, to remember a bloody victory and those who lost their lives in the operation, are being overshadowed.

This year, the Korean Navy and the Jung-gu district of Incheon Metropolitan City will hold a commemoration event together for the first time, by combining a military commemoration and local festival on September 15. It’s the 65th anniversary of the historic victory.

However, some veterans’ associations and cultural groups have criticized the cultural events, including the fireworks and the rock concert, saying they will minimize the real meaning of the celebration.

The victory commemoration “Incheon Landing Operation and Wolmi Festival” will be held at Wolmi Island from September 12 to 15. On September 15, the 65th anniversary, the Korean Navy and a unit from the U.S. Navy will reenact the operation by deploying special forces, 12 battle ships and 17 aircraft.

Other events, including the performance of Navy honor guards, a concert for deceased patriots, and a short running race of 9.15km will be held on September 12 and 13 at Wolmi Cultural Street and the Korean Navy headquarters in Incheon.

However, the rock concert featuring Boohwal and the following fireworks to be held on September 12 triggered the controversy.

An official at a veterans’ group said, “The title of the festival itself is weird. Although we won a great victory during the operation, the commemoration should be more focused on the patriots who died during the operation. In that aspect, the fireworks and rock concert could be seen as a sign of disrespect to the deceased patriots.”

Lee Hee-hwan, an official at the Saeul Foundation of Culture, which is investigating the massacres of civilians in Incheon during the war, said, “I cannot understand how they can link a war to a festival. The historical fact that some 100 civilians at Wolmi Island were killed to make the way for the operation is mostly unknown to the public.”

On September 10, 1950, five days before the Incheon landing, 43 American warplanes flew over Wolmi Island, dropping 95 napalm canisters to “burn out” its eastern slope in an attempt to clear the way for American troops. Hundreds of Korean civilians were killed in these attacks.

The Navy explained that to attract more citizens to commemorate the event, it accepted the proposal of Jung-gu district to combine it with a local festival.

A navy official said, “We have discussed the detailed content of the festival since May. The local government wanted to include the fireworks and rock concert to offer interest things to watch. If such criticism arose earlier, we should have reconsidered it.”

The Incheon Landing, led by then United Nations forces commander General Douglas MacArthur, is widely considered as one of the most decisive military operations in modern warfare, and resulted in a decisive victory and strategic reversal in favor of the United Nations in the early stages of the Korean War (1950-1953). With the victory, the UN was able to recapture Seoul and establish a foothold to advance into the northern part of the peninsula.