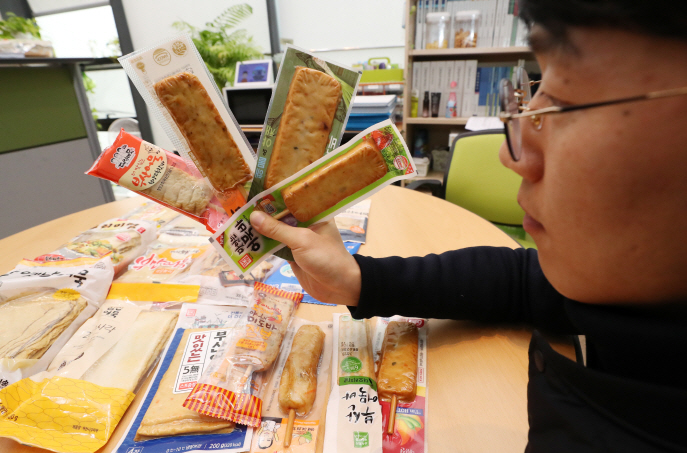 A researcher at the Korea Consumer Agency compares ingredients of fish cakes at the government complex in Sejong, central South Korea, on Dec. 3, 2018. (Yonhap)

SEOUL, Dec. 19 (Korea Bizwire) — The local fish cake industry has continued to grow as manufacturers of fish cakes, which used to be seen only as humble side dish ingredients, are changing consumer perceptions with high-end snacks.

Analysts say that turnover has grown significantly as fish cakes are now seen as a bakery-type luxury food.

On a quarterly basis, the growth rate was higher in the fourth quarter and the first quarter, when seasonal demand for street fish cakes and other products typically grows as the mercury drops.

By retail channel, discount stores recorded the highest sales with 30 percent of the total as of last year. This was due to access to a variety of fish cake brands and aggressive marketing.

Meanwhile, the export outlook is bright as fish cakes have been selected as promising items in China’s domestic market by the Korea Trade-Investment Promotion Agency.

Fish cake consumption in China has been on the rise as demand for frozen and refrigerated foods has increased in line with growing wealth. Korean products are especially popular.

Recently, South Korean fish cake manufacturers have also been turning to European markets beyond China and Japan as fish cakes are seen as a source of protein to replace meat overseas.

Samjin Food, the leading brand of fish cakes, is a prime example. The company recently opened four stores overseas, including locations at Singapore’s Changi Airport and in Indonesia.

Countries importing Korean fish cakes have diversified to include China, Japan, the U.S., Portugal, Indonesia and the Philippines.