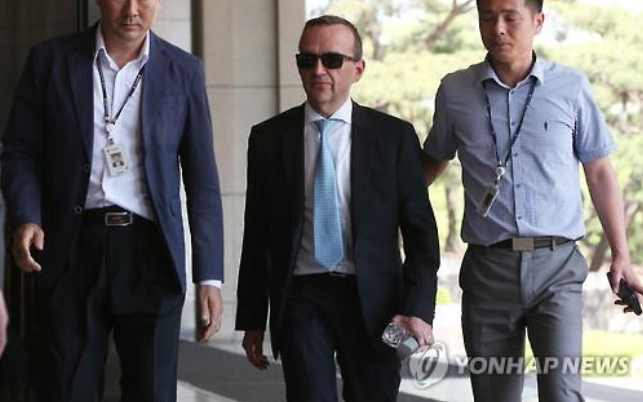 SEOUL, May 19 (Korea Bizwire) – The finance director of Oxy Korea was summoned Thursday as the first among a number of foreign executives who will be questioned in relation to the production and sales of the toxic humidifier sterilizers that resulted in numerous deaths and illnesses here.

Ulrich Hosterbach appeared before the Seoul Central District Prosecutors’ Office in southern Seoul to give testimony in the snowballing case that involves scores of deaths since 2011, including some pregnant women.

Hosterbach has worked as the finance director of the company since 2010.

He declined to answer any of the questions asked by reporters before entering the office.

Later on Wednesday, a former corporate lawyer of the company, identified only by his surname Kim, was also summoned for questioning.

Prosecutors said their status can change to that of suspects in the course of the probe if necessary.

Some other former and current foreign executives in the summons list include John Lee, who headed the company from 2005 to 2010 and Gaurav Jain, who succeeded Lee until 2012.

Lee, the incumbent CEO of Google Korea, led the Korean unit of Oxy when the sales of the sterilizer product was at its peak. Prosecutors said they will soon place a travel ban on the Korean-American.

Jain is suspected of orchestrating the fabrication of reports unfavorable to the company when he was the chief executive, according to prosecutors. He is known to be currently in Singapore.

Prosecutors said they are not yet at the stage to investigate the company’s headquarters in London.

South Korea confirmed 221 people as victims. Among them, 177 had used Oxy products. Out of 90 deaths, 70 are believed to have been caused by the Oxy products.