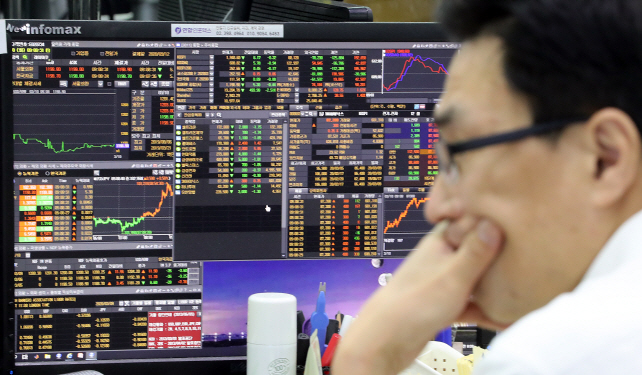 A currency dealer works in the trading room of Hana Bank’s headquarters in Seoul on March 10, 2020. (Yonhap)

SEOUL, Aug. 12 (Korea Bizwire) — The trading volume of foreign investors in shares of listed companies which introduced an English-language disclosure system starting from the fourth quarter of last year has more than doubled, the bourse operator said Wednesday.

The Korea Exchange (KRX) has been providing the English-language translation service for the disclosures of 56 listed companies on a trial basis since September 2020.

The number of listed companies that submitted English-language disclosures during the period from the fourth quarter of last year to the second quarter of this year rose by 69.2 percent compared to a year ago (52 companies).

The number of English-language disclosures also increased by 102 percent to 1,063 cases during the same period.

In particular, foreign investors’ trading volume for the shares of the 32 listed companies that issued English-language disclosures during the period from the fourth quarter of last year to the second quarter of this year amounted to 27.5 trillion won (US$23.7 billion), double the 13.7 trillion won reported a year ago.