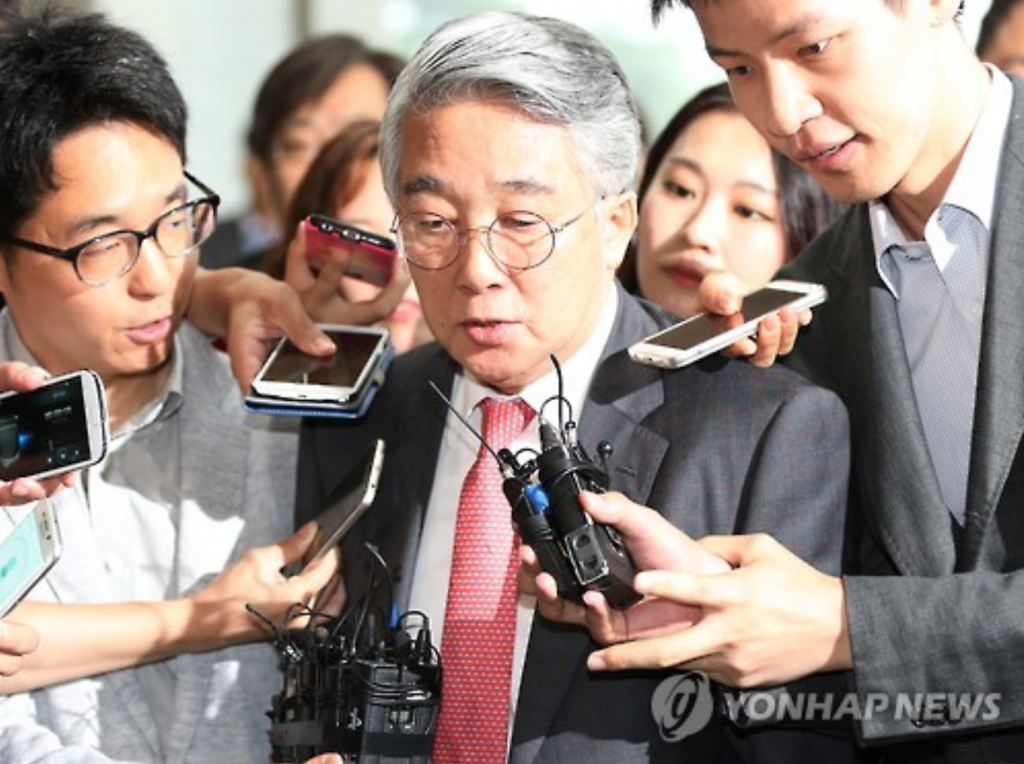 Park Dong-hoon (C), a former CEO of the local branch of Volkswagen, enters the Seoul Central District Prosecutors’ Office to face questioning over the German carmaker’s alleged irregularities that came into light following its emissions scandal. Park, who headed the company from 2005 to 2013, denied any involvement in the wrongdoings. (image: Yonhap)

SEOUL, July 5 (Korea Bizwire) – A former CEO of the local branch of Volkswagen was summoned by prosecutors Tuesday over the German carmaker’s alleged irregularities that came to light following last year’s emissions scandal.

The Seoul Central District Prosecutors’ Office summoned Park Dong-hoon as a material witness to gain background information. Prosecutors said his status can change to that of a suspect, if necessary, following the investigation.

“I was not (involved),” Park told reporters, referring to the string of manipulations conducted on the German vehicles. The 63-year-old also denied the headquarters’ involvement in the process, adding he had no contact with the head office even after the scandal made global headlines.

“I have not much to say at the moment,” the former executive said before entering the prosecutors’ office. “I will fully cooperate with the investigation.”

Park headed Audi Volkswagen Korea from 2005, when it was first established here, to 2013, before moving to Renault Samsung Motors Co., the local unit of Renault S.A. He has been heading the local branch of the French automaker as the first South Korean CEO since April.

Prosecutors said they will grill Park over whether he imported and sold the Volkswagen models with EA 189 engines, knowing the company had cheated on emissions tests by using so-called defeat device software.

The German carmaker is also suspected of doctoring dozens of reports on emissions results, noise levels and fuel efficiency, which are needed to obtain approval from the local authorities. Some models were even imported without going through a proper certification process, prosecutors said.

Late last month, prosecutors formally arrested an executive of the company, identified only by his surname Yoon, on a string of charges, including forging documents and violating the Clean Air Conservation Act.

Prosecutors said they will question Park over whether he received related reports from Yoon, or whether he aided and abetted the wrongdoings.