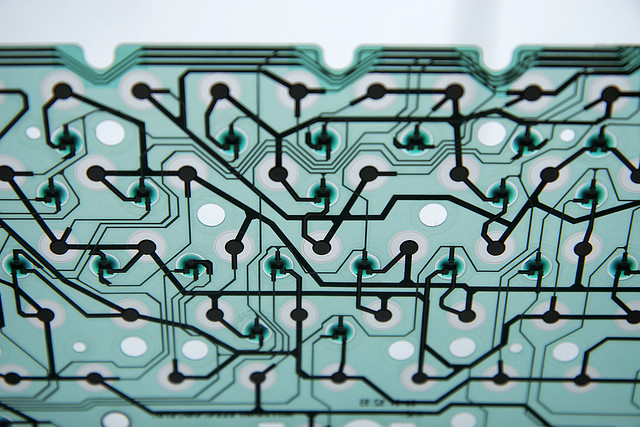 According to the Korean Intellectual Property Office, there have been about 330 cases of FPCB-related patent applications from 2009 to 2013. (image: splorp/flickr)

SEOUL, May 21 (Korea Bizwire) – Computing devices have consistently evolved from the early computers to desktops, laptops and mobile devices. Taking another step forward, a new era is about to begin with emerging wearable devices. One of the key technologies which make wearable devices possible is the flexible printed circuit board (FPCB).

Unlike the conventional printed circuit board (PCB), FPCBs can feature three-dimensional interconnection structures and are more durable so that they can be folded and unfolded several times. Such qualities are essential to the next-generation smartphones which are either wearable or flexible.

Such a phenomenon is due to the fact that conductive ink patterns can be applied more easily to bent or folded parts, contrary to methods like plating or vacuum coating.

The FPCBs with conductive ink patterns are expected to create immense added value as wearable or flexible devices gain popularity. According to British market research firm IMS Research, the global wearable device market is likely to grow from $2 billion in 2011 to $6.7 billion in 2016, an average 27 percent annual growth.