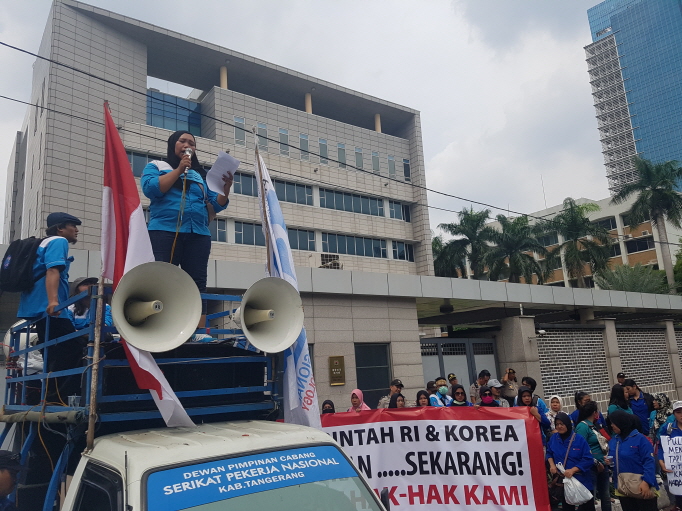 SKB workers are holding a rally in front of the Embassy of the Republic of Korea in Jakarta. (Yonhap)

SEOUL, Mar. 15 (Korea Bizwire) — Indonesian workers who were victims of a Korean business leader fleeing Indonesia without paying overdue wages sent a thank-you letter to South Korean President Moon Jae-in on Thursday for helping them out.

About 300 employees of SKB, a sewing company in Bekashi, West Java, went to Jakarta to hold a rally in front of the Indonesian Ministry of Labor and the South Korean Embassy.

Employees claimed that they were owed overdue wages of 7.2 billion won (US$6.33 million), and nearly 4,000 employees’ livelihoods were threatened.

At the rally, SKB employees holding placards saying “(CEO) ran away with the money” said that they hadn’t received any salary for three months, and called on the Indonesian and South Korean governments to intervene.

The letter continued, “We want to get our lost wages and social insurance fees back.” The letter concluded with remarks about the future regarding the friendship between South Koreans and Indonesians.

“I am confident that the president’s interest will not only gradually improve the poor working conditions of workers in Indonesia, but also serve as a turning point to promote friendship between South Koreans and Indonesians.”