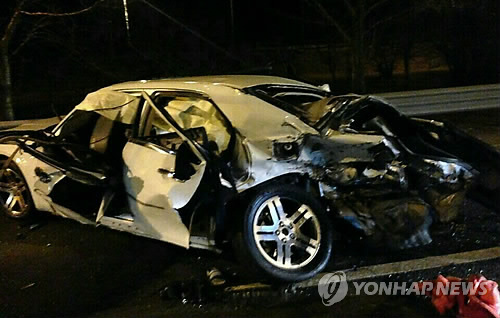 The coastal road linking Yeongjong Island and nearby Yongyu Island is turning into a racing circuit among club members of foreign vehicle owners. (image: Yonhap)

Recently, a traffic accident causing the death of a passenger occurred on an island road without CCTV coverage. However, police have given up pursuing the reckless drivers, saying that it’s too dangerous to stop the speeding vehicles, which can cause other accidents.

According to Jungbu Police Station in Incheon, there was a traffic accident on one of the island’s coastal roads at night on February 1, when a Chrysler and a Volkswagen collided. The accident cost the life of a woman in her 20s who was a passenger in the Chrysler, and led to injuries for the other participants, including two drivers.

At the time, the Chrysler suddenly tried to make an illegal U-turn, but the Volkswagen could not escape from the collision as it was travelling at around 140 km/h on the road whose speed limit is set at 80km/h.

The coastal road linking Yeongjong Island and nearby Yongyu Island is turning into a racing circuit among club members of foreign vehicle owners. The four-lane road on the seawall that was built to allow the construction of the airport runs straight for 9.29km, and is favored by the joyriders as a “racing course.”

Although the speed limit is 80 km/h, as there is no CCTV coverage on the route, few drivers observe the speed limit. However, in that situation, the police repeatedly say that it is hard to crack down the racing and the joyride as it is too dangerous.

A police officer said, “On weekend nights, several foreign vehicles speed on the road. Once they begin racing, chasing them can lead to other accidents.”

The police will set up CCTV cameras to crack down on the racing soon, after consulting with the Incheon International Airport Corporation and Korea Land & Housing Corporation, who manage the road.