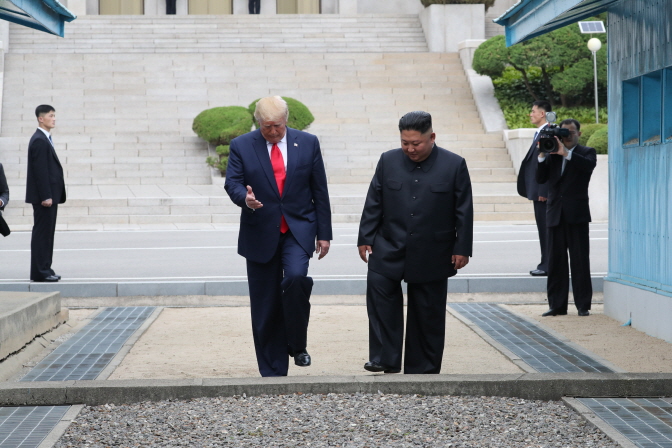 U.S. President Donald Trump (L) and North Korean leader Kim Jong-un cross the Military Demarcation Line into the southern side of the truce village of Panmunjom in the Demilitarized Zone, which separates the two Koreas, on June 30, 2019. (Yonhap)

SEOUL, Jun. 30 (Korea Bizwire) — The world’s spotlight was on the Demilitarized Zone (DMZ) that separates the two Koreas and the truce village of Panmunjom on Sunday as U.S. President Donald Trump and North Korean leader Kim Jong-un had a surprise encounter there.

In accordance with the armistice agreement that ended the 1950-53 Korean War, the DMZ was established by pulling back the two sides’ respective forces 2 kilometers along each side of the Military Demarcation Line (MDL).

It runs for about 250 kilometers across the peninsula.

Despite being intended to remain “demilitarized,” it has been one of the most heavily fortified borders in the world, with South and North Korea installing 60 and 160 guard posts (GPs), respectively, near the MDL as of the end of 2018.

Between them, the two Koreas also stationed large numbers of troops along the demarcation line — thought to be more than 20,000 for GP duties alone — to guard against potential aggression from the other side.

Over the past 65 years or so, the zone has seen sporadic outbreaks of violence that killed hundreds of South Korean soldiers and dozens of U.S. servicepersons.

Panmunjom, also known as the Joint Security Area (JSA), straddles the two Koreas and is the only place in the DMZ where South and North Korean forces stand face-to-face.

It was a venue of discussions for peace during the Korean War and where the Armistice Agreement was signed, and it has since served as a location for high-profile negotiations between the two Koreas, which remain technically at war as no peace treaty was ever signed.

But it has also been ground zero for bloody clashes and high-profile defections, including an attack in 1976 by ax-wielding North Korean soldiers who killed two American service personnel trying to prune a tree there.

Under the agreement between President Moon Jae-in and North Korean leader Kim Jong-un in April last year, however, Seoul and Pyongyang vowed to transform the DMZ into a “peace zone in a genuine sense” by ceasing all hostile acts against each other in and around the area.

Then, in accordance with the comprehensive military agreement signed in September, the two Koreas demilitarized the JSA by disarming soldiers, removing landmines and locking and sealing a total of nine guard posts (GPs).

Inside the DMZ, the two Koreas last year demolished 10 GPs each, with a further one per side disarmed and kept intact for its historic value. They also vowed to push for consultations to remove all DMZ GPs.

Seoul and Pyongyang have agreed to push to allow visitors to move freely around both sides of the JSA across the demarcation line running through the zone, but the plan has been delayed as the two Koreas and the United Nations Command (UNC) have not reached an agreement on a joint code of conduct for such a measure.

The UNC administers all activities inside the DMZ, but North Korea has reportedly demanded that it be excluded from the management of the JSA.