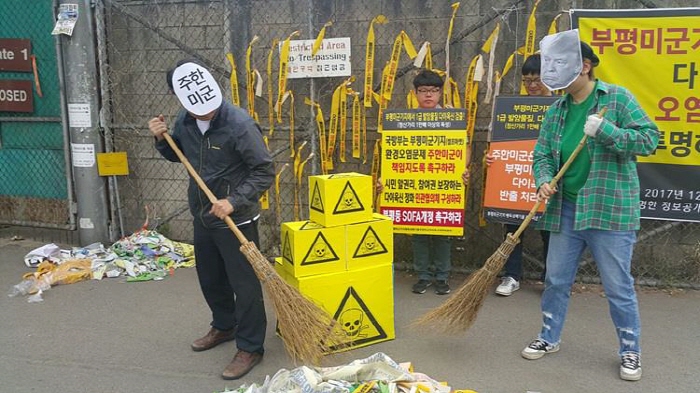 Civil groups staged a protest in front of Camp Market on Monday, calling on the U.S. base to compensate for all damages caused by the contamination in accordance with International Environmental Law. (image: Civil Groups)

INCHEON, May 14 (Korea Bizwire) — As the South Korean Ministry of Defense is taking steps to decontaminate Camp Market, a U.S. Army base located in Incheon’s Bupyeong District that is polluted with dioxins, civil groups say the costs should be borne by the United States Forces Korea (USFK).

Almost 50 civil groups from Incheon staged a protest in front of Camp Market on Monday, calling on the U.S. base to compensate for all damages caused by the contamination in accordance with International Environmental Law.

“Despite various contaminants we found at 24 military base properties returned to South Korea in 2007, USFK is invoking Status of Forces Agreement (SOFA) provisions to deny any responsibilities to decontaminate them,” the civil groups said.

“If we fail to hold them accountable this time, it will only become more difficult for us to deal with future cases of contamination.”

The civil groups also called on the government to prioritize decontaminating Camp Market, and organize a civil delegation to monitor the decontamination process.

The Ministry of Defense made an official announcement this March to hire an agency to decontaminate Camp Market, with the aim to reduce dioxin levels down to 100 pg-TEQ/g.

“The argument posed by the Ministry of Environment that 100 pg-TEQ/g is ‘good enough’ is not based on any reliable evidence,” said Park Ju-hee, secretary-general for the Incheon chapter of Green Korea.

“It is crucial that we conduct a series of tests to set the strictest requirements for decontamination.”

“Dioxins are known to be 10,000 times more toxic than potassium cyanide, and have never been put to decontamination in the past. So, it is very important to ensure transparency of the decontamination process and verifications by experts,” Park added.

The Ministry of Environment found 1,000 pg-TEQ/g of dioxins in 7 out of 33 locations in Camp Market, which exceeds acceptable standards in Germany and other advanced countries.

In one location used as U.S. Army’s Defense Reutilization and Marketing Office in Camp Market, dioxin levels were 10 times higher than acceptable standards in advanced countries.

Lead levels were also 70 times higher than set standards, as well as total petroleum hydrocarbons (TPH) levels exceeding standards by a factor of 10.