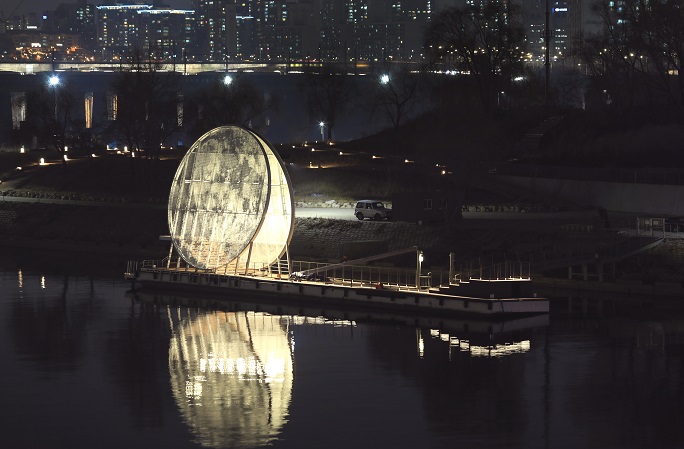 This photo, provided by the Seoul city government on Jan. 4, 2020, shows a night view of the giant moon-shaped art installation by Nodeul Island in Seoul.

SEOUL, Jan. 4 (Korea Bizwire) — An art installation shaped like a giant moon has been constructed on a dock on the Han River, the Seoul city government said Monday.

The installation, named “Dalbitnodeul,” which means “Nodeul under the moonlight,” is made up of two circular metal structures, each 12 meters in diameter, adjacent to Nodeul Island near the middle of the city.

There is an observation deck on the second floor, with a view of the Han River and downtown Seoul, and steps inside the installation where people can sit and watch small-scale concerts performed on the outer deck, the city government said.

The design, by a team of South Korean artists called Nameless Architecture, was chosen in an international competition last year.

“We hope Dalbitnodeul will bring out Nodeul Island’s natural and environmental charms and be loved by citizens as a public art project that comforts their exhausted minds,” Yoo Yeon-sik, chief of the city government’s culture department, said.

An official opening ceremony is scheduled for Feb. 26, the day of the first full moon of the new lunar year, but is subject to change due to the coronavirus pandemic, the city government said.