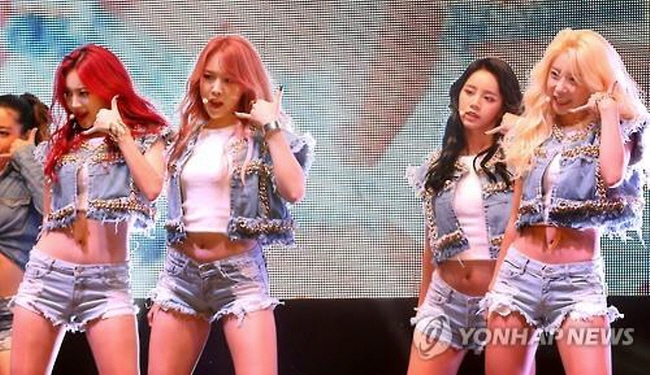 SEOUL, Jul. 7 (Korea Bizwire) – Girl’s Day presented its second album, ‘LOVE’, five years after their debut, on July 7. The group held a showcase on July 6 at KBS Sports World, and showed their pride in the new album.

The title song, ‘Ring My Bell,’ is a catchy song with a strong beat and addictive rhyme. The girls will be performing the song with swimsuits on.

About their stage style overlapping with SNSD’s new concept for their new song, Girl’s Day’s Sojin said that although both groups have chosen the swimsuit concept, SNSD will present a fresh look, while Girl’s Day will focus on delivering a more strong, edgy look.

Hyeri also said that she feels honored to be releasing a song along with SNSD, and to be compared with the famous girl group.

Girl’s Day, which debuted in 2010, has performed hit songs such as ‘Expectation,’ ‘Female President,’ ‘Something’ and ‘Darling.’

Girl’s Day members also talked about how they have changed over the past five years.

They said that they only cared about how they sang or what style to wear on stage, but now they have broadened their perspective on how the public would interpret their performances.

They also expressed their love for the group, saying that they would love to be in the group for more than 500 years if that was possible.

Hyeri added that the group’s strength lies in its ability to adapt to new styles. She said that fans will be delighted with the new album’s unexpected new style.