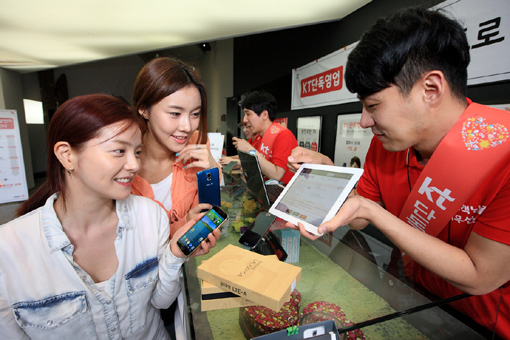 KT’s prime mission now is to recover its market share back up to 30 percent which was broken down for the first time since SKTelecom merged with Shinsegi Telecom in 2002.(image:KT)

SEOUL, Korea, April 29, 2014 (Korea Bizwire)– As KT
starts operating alone in Korea’s mobile telecommunications market as the
company is the last runner for a series of suspensions ordered by the Ministry
of Science, ICT and Future Planning, a big change is expected in the market
dynamics.

KT seems quite determined to make up for the loss during the 45 days under suspension making some envisaging of encroaching upon SK Telecom’s 50 percent market share (including the budget phone market share).

On April 27, according to the telecom industry, KT has officially started to take its turn to operate while the other two competitors are suspended. Previously, SK Telecom and LG U+ have taken advantage of their turns to operate. SK Telecom the first runner has signed on 144,120 subscribers under the mobile number portability rules while it was flying solo and LG U+ has enlistedmore than 180,000 subscribers.

On the other hand, KT with its hand tied while its competitors taking turns to take over the telecom market, has lost 79,449 subscribers to SK Telecom and 65,000 to LG U+. Therefore, KT’s prime mission now is to recover its market share back up to 30 percent which was broken down for the first time since SK Telecom merged with Shinsegi Telecom in 2002.

According to the ICT Ministry’sreport on the mobile telecommunications market in March, KT’s total number of subscribers was 16,473,385 or 29.86 percent in total. The industry is speculating that KT’s market share has dropped even more to 29.7 percent during LG U+’s period of sole operation.

In order to win back the 140,000 subscribers, KT will make a blitz on the market. KT came up with various strategic deals including anunlimited LTE data plan and the “sponge plan” which allows reducing the mandatorytime period up to one year upon changing mobile phones, and letting VIP customers use its affiliate program benefits without getting their credit points deducted.

The major concern of the mobile telecom market regarding return of KT is whether SK Telecom will be able to maintain its 50 percent market share. During the market leader’s sole operation, its market share increased from 50.09 percent to 50.42 percent, however it went down to 50.1 percent during the turn of LG U+. According to thistrend, the possibility still stands that KT could succeed in crushing SKT’s 50 percent market share.

As of now, SK Telecom’s market share among the three mobile phone carriers has fallen below 50 percent, but the share in the mobile telecommarket as a whole is barely over 50 percent thanks to its budget phone subsidiary SK Telink’s contribution.