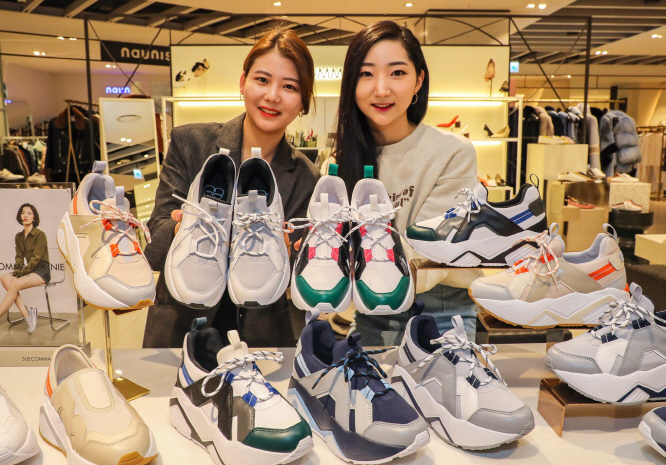 A growing number of women are looking for comfortable sneakers instead high-heeled shoes as light and practical casual clothes are becoming trendy for everyday wear. (image: Hyundai Department Store Group)

SEOUL, Mar. 28 (Korea Bizwire) — This spring, there will be many women wearing colorful, comfortable sneakers.

A growing number of women are looking for comfortable sneakers instead high-heeled shoes as light and practical casual clothes are becoming trendy for everyday wear.

Sneakers are also a comfortable choice when exercising before or after one’s commute.

According to the online shopping site Gmarket on Wednesday, out of all shoes purchased by female customers from January 1 to 24 this year, sneakers accounted for 31 percent, and shoes with low heels accounted for more than half.

On the other hand, heels and pumps accounted for only 10 percent, compared to 22 percent for women’s boots and walking shoes, and 30 percent for high-heeled shoes.

The shift in preferences is a significant departure from three years ago.

Analysts say the change is attributable to the growing number of women who enjoy sports, the casualization of office look, and the introduction of the 52-hour workweek, which makes items that can be worn in everyday life popular.

In line with the changing trend, sneakers are also being released in a various styles for work. In fact, the industry is working on sneaker design for spring.

The new trend, so called “Newtro”, which is a compound word of new and retro, is the keyword of the year. “Newtro” products are typically designed for looks and functionality.

The sportswear brand DYNAFIT has released a new line of design based on retro sneakers from the 1990s, allowing their shoes to be matched not only with casual clothes but also rather formal clothes such as school uniforms and business casual.

Converse Inc. also showcased its “New Warriors,” which were inspired by the 1970s cult film of the same name.

Companies that used high-heels as their main product are also joining the trend. Elcanto recently launched the “Uvely” sneakers. Elcanto explained that the shoes are “ugly” but at the same time “lovely”.

One thought on “High Heels Off, Sneakers On for Work”