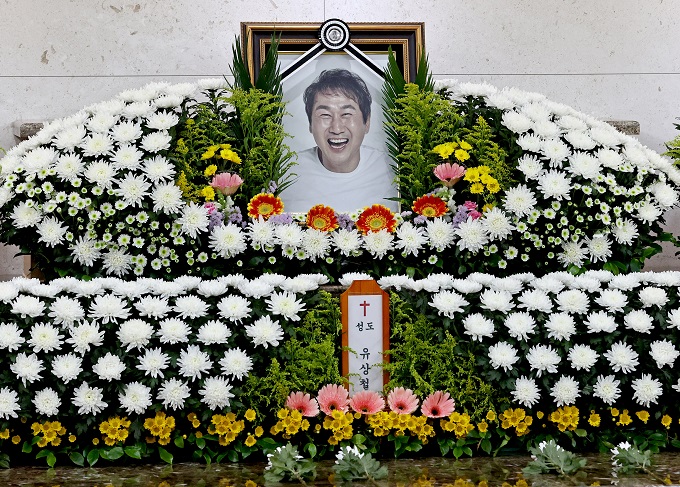 A memorial altar for the late football star Yoo Sang-chul is set up at Asan Medical Center in Seoul on June 7, 2021. (Yonhap)

SEOUL, June 8 (Korea Bizwire) — Tributes have been flooding in from around the football world for Yoo Sang-chul, a star of the semifinalist South Korean team at the 2002 FIFA World Cup, who passed away Monday night at 49.

Yoo succumbed to pancreatic cancer after a battle that began in November 2019.

One of the most versatile players in South Korean football history, Yoo made the FIFA World Cup All-Star Team in 2002 as a midfielder after helping the country to the final four on home soil.

Yoo scored the insurance goal in South Korea’s 2-0 win over Poland to open Group D action in that tournament. It was South Korea’s first victory at a World Cup.

Following a 12-year club career, which included a K League scoring title in 1998, Yoo went on to coach professional and college teams.

Incheon United and Daejeon Hana Citizen, the last and the first pro clubs that Yoo coached, respectively, paid their tributes to the fallen legend on social media.

The Korea Football Association (KFA) also paid its respect, joined by a slew of other K League clubs.

Yokohama F. Marinos, the Japanese club for whom Yoo had two tours of duty as a player, posted photos of Yoo on their kits, along with a tribute message. 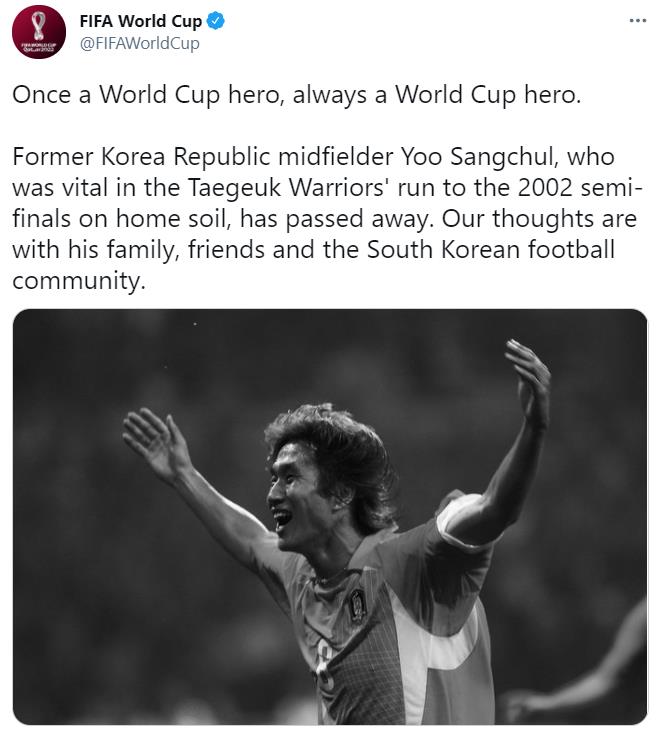 A memorial altar for Yoo was set up close to midnight at Asan Medical Center in the southeastern part of Seoul.

A handful of Yoo’s teammates from the 2002 World Cup paid their visits despite the late hours, reflecting on their memories with one of the most beloved players and coaches of his generation.

Hwang Sun-hong, former Daejeon Hana Citizen head coach who opened the scoring in that Poland match at the 2002 World Cup, said he was sorry that he didn’t take better take care of Yoo.

“As a player, a coach and a human being, Yoo Sang-chul was simply the best,” Hwang said. “I think we’ve lost such a good person. He dealt with a lot of stress from a young age, and I hope he will now rest in peace in a good place.”

Choi Yong-soo, another member of the 2002 squad, recalled how he and Yoo started out as rivals and eventually became friends. They had some fun times together on the national team in particular, Choi added.

“He still had so much to give to help develop Korean football,” Choi said. “I am sure he had so many things he wanted to do but couldn’t. I hope he gets to do all of that up in heaven.”

Hyun Young-min, one of the youngest players at the 2002 World Cup, said Yoo was always a friendly figure who took younger teammates under his wings.

“When I saw him last year, he looked to be in good health. I was so hopeful then,” Hyun said. “This is all very sudden. He still had so much left to do.”

Seongnam FC goalkeeper Kim Young-kwang, who played with Yoo at the 2004 Athens Olympics, said he was also roommates with the late star at international events.

“After everything he’s done for me, I’ve been trying to pay it forward to other guys,” Kim said. “It just breaks my heart, seeing his smile in his portrait.” 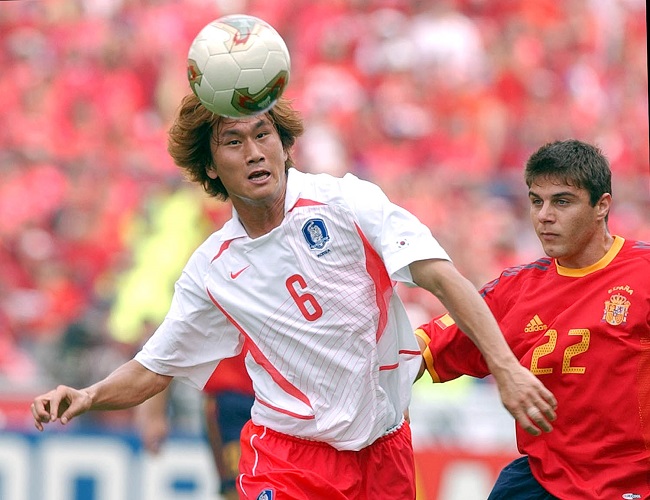 In this file photo from June 22, 2002, Yoo Sang-chul of South Korea (L) heads the ball against Spain in the quarterfinals of the 2002 FIFA World Cup at Gwangju World Cup Stadium in Gwangju, 330 kilometers south of Seoul. (Yonhap)

“I asked him six months ago how he was holding up, and at the time, I felt as though he’d return to football in the near future,” Chung said.

“I didn’t think he’d leave us so soon. I hope he rests in peace. We’re also thinking about how we at the KFA can pay our proper respect.”

Paulo Bento, the head coach of the men’s national team, offered his condolences before the start of his online press conference Tuesday, held ahead of a World Cup qualifier against Sri Lanka.

“As a member of the national team, Yoo Sang-chul brought so much joy to the Korean people when football here was at the height of its powers,” Bento said.

“I am deeply saddened that we’ll no longer be living in the same era as fellow footballers. I’d like to send my condolences to his family.”

The KFA announced that Yoo will be remembered and honored before and during Wednesday’s World Cup qualifying match at Goyang Stadium in Goyang, Gyeonggi Province.

A tribute video will be played on the main scoreboard and all participants will observe a moment of silence before the kickoff. Players will wear black armbands, and coaches will put on black ribbons.

In a nod to Yoo’s national team number, six, fans will be asked to refrain from cheering for the first six minutes of the match. A banner with a tribute message and 66 chrysanthemums will be on display in the stands.