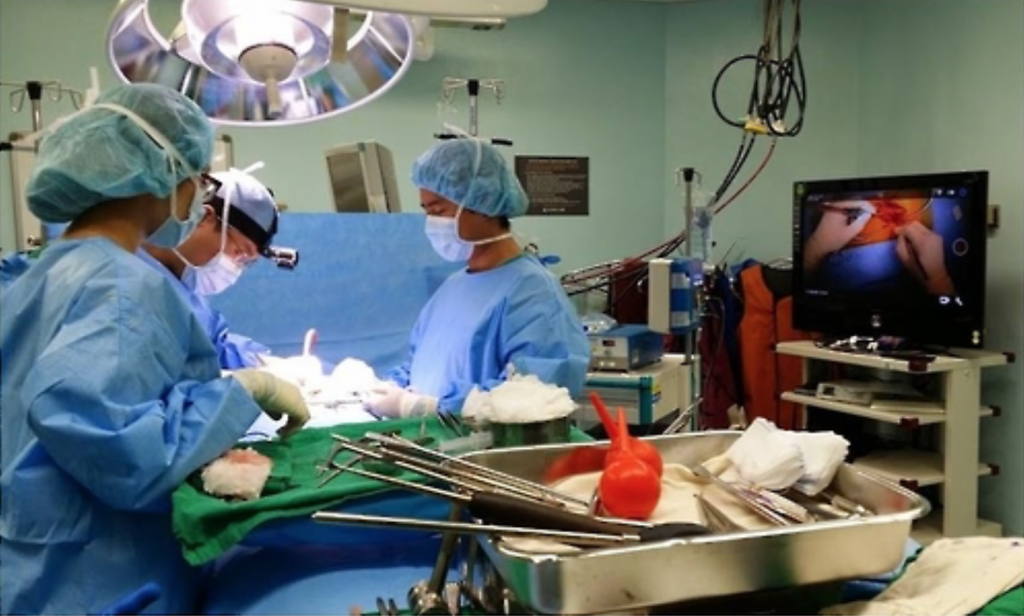 “None of the three devices had any drawbacks when used in our spine surgeries, and we expect to soon reach a point where they can actually replace expensive medical equipment.” (image: Yonhap)

SEOUL, March 7 (Korea Bizwire) – Using wearable devices during surgical operations is not yet a popular practice among South Korean doctors, but a team of local neurosurgeons recently proved the practicality of these devices in real-life operations, suggesting that they may possibly replace existing medical equipment in the near future.

The team, led by Dr. Yi Seong from Severance Hospital, used three wearable devices –Google Glass, a GoPro Hero 4, and a Panasonic HX-A100 – in spine surgeries to evaluate their viability in replacing conventional medical devices that often come with much higher price tags.

One of the biggest advantages of using such devices is that doctors are able to record the surgical procedures for future reference or for educational purposes, but the footage can also play an important role in cases of unprecedented medical disputes.

According to officials, such benefits were only achievable in the past with massive investment – often exceeding 10 million won ($8,654) in total – in both equipment and professional personnel for filming the procedure.

“Each of the (wearable) devices cost less than 500,000 won, but they’re almost as effective as high-priced, high-tech medical equipment,” said Dr. Yi. “Each had its own pros and cons when it came to a more detailed evaluation, which included the quality of the footage, accessibility in the operating environment, and two-way communications.”

For example, despite Google Glass having exceptional comfort and convenience as a wearable device, the resolution of the footage was disappointing, Yi said, although this was mainly because the team had to use a first-generation prototype, and Google stopped its production in 2015.

The GoPro Hero 4, on the other hand, was rather heavy to wear around the head, but offered the highest resolution out of the three products, making its footage best suited for post-surgical reference. The HX-A100 also offered good enough resolution to be able to serve the same purpose, Yi noted.

Overall, officials chose Google Glass as having the best potential of replacing traditional equipment, if it can achieve its initially intended goal of displaying a patient’s medical data on its display, recording high resolution footage, and allowing for two-way communications.

“None of the three devices had any drawbacks when used in our spine surgeries, and we expect to soon reach a point where they can actually replace expensive medical equipment,” Yi added.