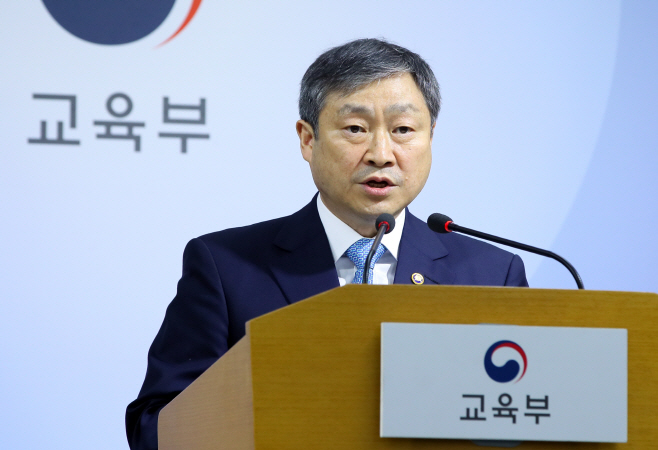 Vice Education Minister Park Baeg-beom speaks during a press conference at the government complex in the city of Sejong, central South Korea, on July 26, 2019. (Yonhap)

SEOUL, Jul. 26 (Korea Bizwire) — A prestigious private high school in the southwestern city of Jeonju on Friday retained its special status, which guarantees greater autonomy in admissions, financing and curriculum, for another five years despite the government’s efforts to reduce the number of such elite schools blamed for deepening educational inequality.

The Education Ministry announced that it has overturned a local education office’s decision to cancel a license for Sangsan High School as an “autonomous private high school.”

Education Minister Yoo Eun-hye disagreed with the decision by Kim Seung-hwan, chief of the North Jeolla Province education office, to cancel the license for Sangsan, Vice Education Minister Park Baeg-beom told a press conference at the government complex in the city of Sejong, central South Korea.

Autonomous private high schools must pass an assessment every five years in order to have their status extended.

In case cancellation of the autonomous private high school license is approved, the school is required to turn itself into a general high school.

Under the education law, local education chiefs need to get approval from the education minister if they wish to cancel the designation of an autonomous high school.

“It is not within the discretion of the North Jeolla education office’s chief to factor in the ratio of screening freshmen candidates, which is based on social integration, to a performance assessment,” the vice minister said.

“The assessment was illegal and inappropriate.”

In June, the local education office did not renew the autonomous school license for Sangsan, because it was 0.39 point short of the minimum score on an 80-point scale in the performance assessment.

Following the announcement, the North Jeolla Province education office is expected to take legal action over the announcement and bring the case to the Constitutional Court.

During the press conference, however, the education ministry said it has approved the cancellation of licenses for two other autonomous high schools — Ansan Dongsan High School near Seoul and Gunsan Choongang High School in the southwestern city of Gunsan.

Ansan Dongsan High School failed to reach the achievement standard of 70, set by the Gyeonggi Province education office and Gunsan Choongang High School has opted to turn itself into a regular high school due to its difficulty in recruiting students.

The education ministry said the assessment of the two schools had been conducted in a legal way and found no procedural problems in the assessment.

On July 9, the Seoul education office decided to cancel licenses for eight out of 13 autonomous private high schools in Seoul.

The education ministry said it will convene a meeting of the committee, tasked with designating special-purpose high schools on Thursday to discuss the cancellation of the licenses for the eight schools.

If the meeting is held on Thursday, the education minister is expected to give her final say over the cancellations as early as Friday next week.

Currently 42 autonomous private high schools are operating across the country, and 24 schools, including the 13 in the capital, are undergoing evaluations this year.

President Moon Jae-in promised to scrap the privileged category of schools during his election campaign in 2017 and said that the cancellation of the elite schools’ licenses are one of his government’s top educational policy priorities.

Critics say the operation of such elite high schools can deepen inequality, stratifying schools and undermining efforts to improve the quality of overall education.