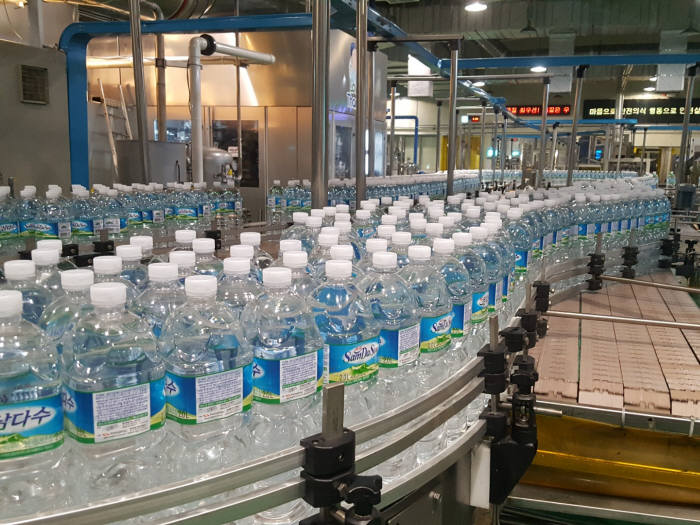 Jeju’s clean groundwater has an unrivaled presence in the South Korean market.

Samdasoo, volcanic bedrock water produced and bottled by the Jeju Province Development Corp. (JPDC), has maintained the top spot in the domestic mineral water market for a long time.

Large companies that have entered the mineral water and beverage market are seeking to secure market share by utilizing the clean image of Jeju Island.

These companies are striving to secure copyrights, and they are even preparing to risk lawsuits.

South Korean confectionery company Orion Corp., for example, has recently been pushing ahead with the domestic sale of Jeju’s volcanic mineral water despite opposition from Jeju authorities.

As a counter measure, Jeju’s provincial government is poised to limit the supply of volcanic mineral water on Jeju Island, throwing a wrench into corporate planning.

Volcanic sea water, one of the resources of Jeju, a volcanic island, is the water that naturally filtered into the ground by volcanic rock formations.

Analysts say that the “water conflict” between the province and Orion hides the province’s desire to maintain the exclusive market status of Jeju Samdasoo, which is produced and sold by the JPDC.

Although Orion has released a drink using volcanic sea water rather than Jeju groundwater, it can be seen as a competition with Samdasoo in the bottled water market using Jeju’s clean brand.

If Orion’s volcanic sea water competes with Jeju Samdasoo, some worry that it could disrupt sales of the JPDC, a local corporation, and that reckless competition to develop resources could also arise.

Meanwhile, the province manages water as a public resource and only grants the development of underground water to the JPDC.